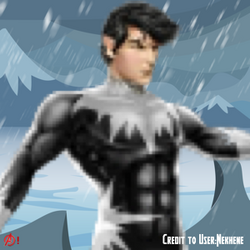 Jean-Paul Beaubier was an infant when his parents were killed in a car crash. He was soon adopted by a family named Martin and separated from his twin Jeanne-Marie. Jean-Paul led a rather lonely childhood, often getting into trouble. As a teen, he attempted to steal from a man named Raymonde Belmonde, who was himself involved in shady dealings. Belmonde helped the young Jean-Paul deal with his emerging super-human powers and perhaps with his homosexuality as well.

Jean-Paul eventually left Belmonde and joined a circus in France as an acrobat. Always fiercely nationalistic, Jean-Paul returned to Quebec and joined a team known as The Hand, who claimed to fight for Canada's rights. However, he discovered their terrorist activities and left the group after stopping a bomb on a bus, with no official recognition that he was ever a member. Jean-Paul then decided to turn his passion for skiing into a career, and with his powers of speed quickly became an Olympic champion.

After gaining notoriety as a sport star, he was contacted by James MacDonald Hudson, who had already met Beaubier's twin Jeanne-Marie. Jean-Paul was intrigued to meet the sister he never knew and joined Department H as Alpha Flight's "Northstar."

Northstar remained an active member of the Alpha Flight, surviving through the apparent abduction of his sister and then finding her again as a prisoner of Headlok. Following Headlok's defeat and Aurora's return to active duty, Jean-Paul discovered a baby abandoned in a dumpster, while in combat with the rest of the team. The child was HIV-positive and had already manifested AIDS symptoms, but Jean-Paul adopted her and named her Joanne. Sadly, Joanne died shortly thereafter, but her life and death catalyzed something inside Northstar, and he called a press conference at which he announced "I am gay".

Northstar is a mutant and has displayed the following powers:

Equipment: Northstar's costumes are modified so they do not tear when he uses his powers.
Transportation: Alpha Flight's Omnijet
Weapons: None known.

Retrieved from "https://marvelcomicsfanon.fandom.com/wiki/Jean-Paul_Beaubier_(Earth-1010)?oldid=114573"
Community content is available under CC-BY-SA unless otherwise noted.