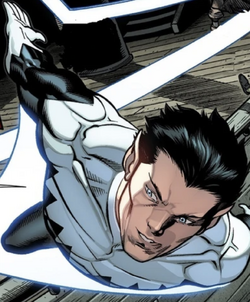 Please, I'm not a hero. I'm just someone in a position to do some good.

Jean-Paul was raised alongside his twin sister, Jeanne-Marie, in Montreal. He was disowned by his family for being gay, but maintained a close relationship with his sister. However, when his mutant powers developed at the age of 18, but Jeanne-Marie remained human, a bit of a gap did begin to form between them.

Feeling empty and alone, he decided the only course of action was to use his powers to save people. It wasn't long until he gained a reputation as a local superhero dubbed "Northstar". His fame and fortune is what led to his family trying to reconnect with him, but at that point, he had come to realize they were all bigots, and he rebuffed them.

He was eventually approached by the X-Force, who revealed to him that his powers stemmed from his mutant DNA, and offered him a family. He accepted their offer and was taken to Krakoa, where he was welcomed by his fellow mutant brothers and sisters.

His status as a local hero worked in his advantage when he joined X-Force, which helped bring them some good press. He and his teammate, Iceman, became close friends after working together on several missions, and eventually fell in love.

[[Category: In a Relationship with Bobby Drake Characters]]
Retrieved from "https://marvelcomicsfanon.fandom.com/wiki/Jean-Paul_Beaubier_(Earth-101)?oldid=249102"
Community content is available under CC-BY-SA unless otherwise noted.