Marvel Fanon
Register
Don't have an account?
Sign In
in: Characters, Templated Articles, No Dual Identity,
and 13 more 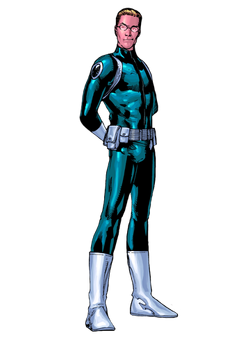 At some point in his career, Jasper Sitwell was indoctrinated into the ranks of Hydra, for whom he took on a role as a double agent within S.H.I.E.L.D. Overtly, he conducted his duties with efficiency, while covertly he aided a deep-rooted conspiracy to influence the development of the world.

Following the events in Puente Antiguo, New Mexico, Agent Sitwell met with Agent Coulson in a diner and was informed that the World Security Council wished for Emil Blonsky (the "Abomination") to be released from prison to join the Avenger Initiative. The World Security Council blamed Blonsky's fight in New York City on Bruce Banner rather than Blonsky himself, and S.H.I.E.L.D. was tasked with sending an agent to secure Blonsky's release from General Ross. Forced to comply, yet unwilling to see Blonsky released, the two agents decided to sabotage the meeting instead. At Sitwell's urging, Coulson reluctantly sent "The Consultant", Tony Stark, in a ploy to engineer Ross's refusal.

The next day at the restaurant, Sitwell approached Coulson who informed him that their plan had worked, and that Stark had annoyed Ross so much that Ross tried to have him removed from the bar.

Agent Sitwell's skills as an analyst saw him positioned among the crew of the newly commissioned S.H.I.E.L.D. Helicarrier shortly before an attempt to conquer Earth was made by the Asgardian Loki. In this role he spent much of his time monitoring communications traffic in the hunt for the rogue Asgardian. After Loki's attack on New York, Sitwell was sent to neutralize Claire Wise and Benny Pollack and retrieve Item 47. He concluded this mission by recruiting both of them to S.H.I.E.L.D..

Sitwell was at the Hub when Coulson and his newly-formed team made their first visit there, and was 'neutralized' by agent Jemma Simmons while she was trying to help Skye hack the network. He was also the person Coulson turned to when he was hunting for 'off-the-grid' Director Fury, and again one of the Level 8 personnel Coulson called together when they decided to look into candidates for being the "Clairvoyant," but was reassigned to the Lemurian Star before he could actively participate in the hunt. The ship was then captured by mercenaries led by Georges Batroc and its crew held for ransom. Steve Rogers, Natasha Romanoff and the counter-terrorism team S.T.R.I.K.E. later rescued them.

Sitwell returned to the Triskelion's operations center, where he witnessed Rogers single-handedly defeating the S.T.R.I.K.E. team sent to neutralize him after Hydra leader Alexander Pierce suspected him to be withholding information that could threaten Hydra's plans. After Rogers escaped the Triskelion, Sitwell issued a manhunt for Captain America.

After meeting with Senator Stern, a fellow Hydra agent, Agent Sitwell was captured by Steve Rogers, Natasha Romanoff and Sam Wilson to interrogate him about Hydra's plans involving Project Insight. At first he refused to talk, so Romanoff pushed him off a building, only for him to be caught by Wilson in mid-air. He then revealed that Hydra wanted to use S.H.I.E.L.D.'s helicarriers to target more than twenty million people, who were deemed a threat to Hydra's new world order. Sitwell expressed fears that Pierce would kill him for revealing the truth about Hydra's intentions.

His captors, wanting to use Sitwell to bypass various DNA-encoded locks that they might encounter, took him to their car to transport him. However, they were attacked by the Winter Soldier while en route, with the Soldier throwing Sitwell out of the car and into the highway, where he was instantly hit by a truck and killed.

Agent Sitwell is a fast talking communicator who is "legendary" within S.H.I.E.L.D. for his ability to play the "patsy".

Sitwell has impaired vision and wears corrective lenses as a result.