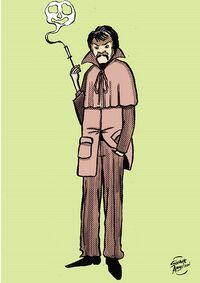 Magneto, we're all done for? Please, help me get out of this!

Jason Wyngarde was a bitter man. He worked as a special effects manager in Hollywood using his mutant power of illusion creation to create seemingly deadly illusions that weren't even there. He felt he had little purpose, and it would be a lie to say he did. But soon after, when Magneto heard of his work, he searched for the man. He found him on the streets, out of a job after his bosses found out he was a mutant. Magneto told him that he could have purpose again, and he gladly accepted.

Soon he was among the other Brotherhood members. He still did not feel like he belonged, so he played cruel jokes on the Toad. But soon enough, they were fighting the X-Men. His incredible illusion power almost had him within their grasp, but a fatal shot was made by Cyclops meant for Quicksilver, and he missed. This set off all the explosives in the factory. Mastermind could not create any illusions to protect him, and Magneto was unwilling to shield him, since he was just a pawn. Jason was killed in the explosion.

Illusion Creation: Jason had the power to create extremely convincing illusions with his mind. These powers can affect all 5 senses. He can make objects seem invisible, even though they are there. Jason's powers were so great that his illusions can be recorded on camera and watched around the world.

Memory Alteration: Jason had the power to alter the memory of others, though he was not very adept in this power.

Mental Symptoms: Jason can cause people to die by creating the illusion that they have been killed.

Retrieved from "https://marvelcomicsfanon.fandom.com/wiki/Jason_Wyngarde_(Earth-5)?oldid=244901"
Community content is available under CC-BY-SA unless otherwise noted.