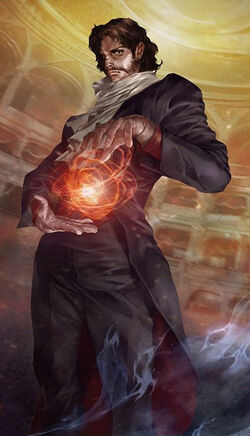 Why would you believe your eyes... when you could believe me?

Ever since his mutant abilities manifested, Jason Wyngarde has used them to his advantage to get whatever he wanted in life. However, he eventually made it onto the radar of the Weapon X Program, and was sedated so that they could capture him without resistance.

When he woke up, he was being held in a cell designed to shock him if he tried to use his powers. However, he was eventually able to muster up enough power to trick William Stryker into believing that Jason was his son, and proceeded to let him out of the cell. From there, Jason continued the ruse until all of Weapon X believed him to be Jason Stryker.

Deciding to stay in that position of power, he ended up having a hand in creating many of Weapon X's worst weapons. When the day came that Wolverine was able to escape, Jason only managed to survive by tricking Wolverine into thinking he was looking into a mirror, which convinced him to turn the other direction.

From there, he went on to be recruited by Magneto into joining the Brotherhood of Mutants, alongside the likes of Mystique, Emma Frost, Destiny, Sunfire, Thunderbird, and Blob. After joining, Jason took on the name Mastermind, and went on to become one of Magneto's most trusted lieutenants, due to being unable to trick him while he was wearing his helmet.

Mastermind eventually attempted to manipulate Jean Grey into betraying the X-Force and unleashing her full power to wipe out humanity, under the order of Magneto. However, this plan failed, and the backlash from Jean's powers wound up putting him into a coma. His body was eventually moved to the island of Genosha after the Brotherhood migrated there from Asteroid M. He never had a chance to enjoy the island in its prime of mutant population, as he was only awoken by the Sentinel attack that destroyed the city. Lost and confused in the chaos, Mastermind was eventually crushed by falling debris, and extinguished by a passing Sentinel, which he proved unable to fool.

Retrieved from "https://marvelcomicsfanon.fandom.com/wiki/Jason_Wyngarde_(Earth-101)?oldid=249575"
Community content is available under CC-BY-SA unless otherwise noted.