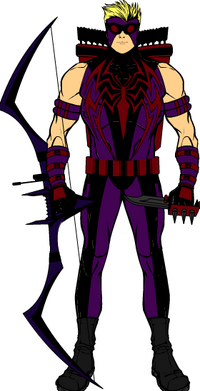 Never seen a spider archer before? Well it's your lucky day, now you have.

Jason is the son of the legendary archer Hawkeye and one of the original Spider-women, Jessica Drew. Unlike most of the children of the Avengers and other heroes, Jason was born in London, England where his mother is originally from and where his parents decided to move shortly after their wedding. To say Jason's life was normal would depend on one's perspective as despite many heroes retiring, his own parents did not and decided to continue to fight crime in the United Kingdom. But, for much of his earlier years of life Clint and Jessica took turns going out in handling crime when it was needed but spent the rest of their time also with their son.

When he was four, Clint and Jessica started their training with their son in the hopes he would become interested in heroics and follow in their footsteps. In the beginning, Jason viewed these as merely fun games and chances to spend time with his parents, mimicking and copying their moves the best he could when he started. In the meantime, Jason also went to school when he wasn't training and managed to make a few friends but not many due to the public knowledge of who his parents were. With the dangers that came with being associated with heroes not many parents were thrilled to have their children as such, but Jason never seemed to mind as he settled with the friends he had even well into his later years.

By the age of twelve, Jason began to take a more serious attitude since by this time his parents decided to start taking Jason with them on there heroic outings. He began to take his training even more seriously to the point he quickly began mastering several fighting forms, weapons, and proficiency in acrobatics and archery like those of his parents. It also was throughout his life he realized that he had his mother's powers, leading Jason to often have to learn to properly use them and when to hold back. Still, he was a quick study and eventually took the name of "Spiderhawk" as his codename in the beginning, helping to take down organized crime and other street-level concerns.

What Jason was kept in the dark about however, was that his parents had also begun to uncover another plot of an old enemy: HYDRA. Spooked by this, Jessica often was away to follow leads while Clint continued things with his son which lasted for the next few years. Though always wondering what was wrong with his mother Jason decided never to question it.

Eventually, word reached the Barton family about plans for the Avengers Academy being opened which seemed to come at the perfect time. Concerned with HYDRA's return and worried that Jason might be caught in the crossfire in some way, Jessica talked with Clint about the offer they were sent. The two came to the conclusion it would be safer for Jason to leave England for the time being not just for his safety but so he could socialize with others like himself without concern of being judged or viewed as a safety hazard.

So, at the age of sixteen Jason made the several long hours trip to Los Angeles where he was brought to the newly opened academy. And almost immediately he was greeted warmly by some while being sized up by others.

Due to mutagenic genes passed down from his mother, Jason inherited some attributes of a Spider. Though whether he will ever manifest unique abilities of his own or additional powers is not clear.

Though his strength is unknown, Jason possess strength ten times that of someone his age, height, and weight.

Retrieved from "https://marvelcomicsfanon.fandom.com/wiki/Jason_Barton_(Earth-7194)?oldid=162097"
Community content is available under CC-BY-SA unless otherwise noted.