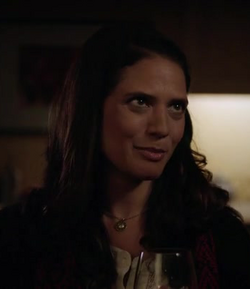 Rebecca Stevens, born 7 September 1977, was an agent of S.H.I.E.L.D. until she was killed in the line of duty. Agent Stevens was chosen as one of the test subjects for the T.A.H.I.T.I. project, a program devised by Director Fury to revive a fallen Avenger. Agent Stevens was brought back to life, but the effects of the GH.325 serum drove her and the other test subjects insane as they became increasingly obsessed with a series of mysterious glyphs. Agent Phil Coulson, the head of the T.A.H.I.T.I. project, came up with the idea of "erasing" the test subjects by implanting them with false memories and giving them a new identity. Agent Stevens was given the new identity of Janice Robbins, an art teacher from Iowa now working in Upstate New York.

Years later, Janice took a man back to her apartment. While they were making small talk and trying to figure out if they had met before, the man took off his shirt and revealed he had tattooed the glyphs all over his body. The man was Sebastian Derik, another T.A.H.I.T.I. test subject, and he had been tracking down the other test subjects and killing them. Derik then took out a knife, killed Janice, and started carving the glyphs into her corpse. Phil Coulson, now the director of S.H.I.E.L.D, was made aware of her murder, and began an investigation that ended with Derik being taken into custody.

Retrieved from "https://marvelcomicsfanon.fandom.com/wiki/Janice_Robbins_(Earth-1010)?oldid=123930"
Community content is available under CC-BY-SA unless otherwise noted.