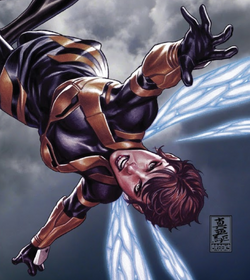 Hank... what in God's name have you done?

Janet van Dyne was an Agent of S.H.I.E.L.D. fighting against Apocalypse alongside her fiance, Hank Pym as Ant-Man and the Wasp. After S.H.I.E.L.D. fell, the two of them joined the Avengers to continue the fight.

Wasp was slightly cautious when Hank and Iron Man created Ultron, and later became horrified when Ultron betrayed them and started amassing his own empire. Janet and Hank would later both be captured and kept as test subjects.

Ultron later used Janet's body to transfer the mind of his wife, Jocasta, into after her body became damaged. The process was successful, and completely erased Janet's mind from her own body.

Super Strength while in Altered Size

Retrieved from "https://marvelcomicsfanon.fandom.com/wiki/Janet_van_Dyne_(Earth-9999)?oldid=244828"
Community content is available under CC-BY-SA unless otherwise noted.