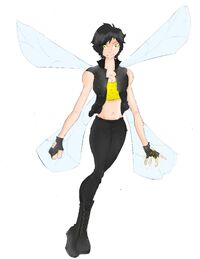 Earth-981
Base Of Operations
Port Macedonia, The Triskelion
Characteristics
Gender

Janet van Dyne was the daughter of world-renowned scientist Vernon van Dyne and the daughter of an Asian mother. She is a mutant who could generate a wasp-like sting which she discharged through her hands. Early in her life, she was a flighty, self-centered dilettante living luxuriously on her father's fortune. She was then introduced to her father's colleague Hank Pym Jan van Dyne gradually fell in love with Pym eventually as the pair started going out on dates and eventually dating each other.

Pym and Van Dyne would later become crime fighting partners under the identity of Ant-Man and Wasp.

Janet has the strength of a normal human female of her age, height, and build who engages in moderate regular exercise. The Wasp's strength was boosted when she reduced in size.

The capability of Janet's sting is dependent on her size. Also, at small size, Janet is at risk of getting crushed.

Retrieved from "https://marvelcomicsfanon.fandom.com/wiki/Janet_van_Dyne_(Earth-981)?oldid=223317"
Community content is available under CC-BY-SA unless otherwise noted.