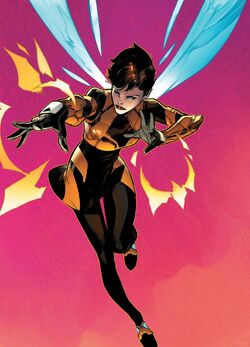 Janet van Dyne was the daughter of country-renowned scientist Vernon van Dyne, and her unnamed Vietnamese mother, who was also a fellow scientist of his father's, which was presumably born and was raised between the middle and late 1970s somewhere in Cresskill, New Jersey. Growing up idolizing her parents (even after their undisclosed and unfortunate demises during her adolescence), she used their inheritance to honor their memories as she eventually went to college in New York at the New York University, with Janet finally earning double PhDs, one in molecular biology in her adulthood after finishing college right after successfully finishing her doctorate degree.

Due to her remarkable intellect not just anyone can match with, Janet would later be hired by a clandestine peace-keeping organization deemed to recruit her into making the world a safer and better place with her contribution. Having unintentionally genetically altered by her lab partner and future lover, Dr. Henry "Hank" Pym in an experiment gone wrong with the Pym Particles she accidentally caused, Janet subsequently gained the newfound natural abilities to alter her size, fly at rapid speeds and fire bio-electric energy "stings," and so much more.

However, despite having to genetically gain the following powers after the accident, Janet's unexpected change in status as a mutate started as a rumor that spread by one of her colleagues, specifically Cleo Nefertiti, who bitterly hated her with a growing passion for realizing that she could never be better at her. Because of it, her sprouted lies had caused Janet's most respected friends and fellow colleagues within their workplace to despise her from time to time, similar to the way some people would treat mutants with great prejudice as if they weren't apart of the same race (genus) with humans. In response, Janet broke down in tears and almost succumbed to depression, feeling broken and hopeless that none of her colleagues would want to be with her, while Pym continuously come to regret himself for partly and was non-stop apologetic to her causing what happened on that day.

Pym still blamed himself for what happened, although he never stopped supporting and helping Janet, to which she eventually forgave him for what happened and encourage him move on, causing the two finally find a mutual romantic attraction with one another. Knowing that she'll always have Hank on her side together, Janet grew more and more confident for being a mutate, not even caring whether or not everyone in her workplace would hate her for being one. After willingly going through a lot of extensive training under the agency's guidance and the offer of then-deputy director that was agent Nick Fury, she then called her heroic persona as none other than the Wasp, to which she became Pym's partner in some particular missions and covert operations S.H.I.E.L.D. had exclusively sent them across the globe until the present day of the early to middle days of the 2000s. At some point in time, the two would eventually commit their truest of feelings to one another and decided to get married, as a great leap to their long-lasting relationship which stood strong for several years until today.

Later on, she and her husband became a founding member of the now famous Earth's Mightiest Heroes, the Avengers, which first officially formed during the Chitauri Invasion's unforgettable Battle of New York, in their noble and selfless battle against Loki and the great Chitauri waves summoned by the Tesseract wormhole during the days of modern era. At some point in time later on after the Chitauri Invasion, Janet apparently decided to resign both at S.H.I.E.L.D. and the Avengers due to reasons unspecified by Pym, though in reality, he was already keeping a secret only he and Janet herself knew regarding her true whereabouts.

Pym then later admitted to his teammates that Janet was still recovering after she suffered from a case of Post-Traumatic Stress Disorder, the same way Tony Stark did when he almost died during the climactic battle on New York. Along with it, through unknown means, Janet was on her last known mission battling the powerful lost creature known as Psyklop, when her regulator was heavily damaged, and the only way to stop it from causing further havoc was to get the cosmic creature and herself out of the city, sacrificing her own life save the lives of millions, unknowingly becoming lost to the mysterious Quantum Realm, the dimension she and Pym had only been studying since the discovery of the Pym Particles.

Despite this surprising incident, the two separated couple were still shown to have a way to contact each other since several months have passed, later revealing that Janet was still alive somewhere in the "civilized" regions of the Quantum Realm, trying to find her way out of there as fast and as careful as she could, with the help of her newfound accomplices and allies, while also helping them in their cosmic adventures within the mysterious and yet wonderful microversal realm.

Unique Physiology: Due to long-term exposure to Pym Particles similarly to Hank Pym's experience with the latter, Janet could reduce herself in size, down to the dimensions of the insect from which she takes her name, roughly 1/2 inch in height. She usually chooses not to retain her standard density while at this reduced mass, but can choose to do so at will. The "lost" mass is shunted to a pocket dimension for later retrieval. Additionally, her strength was boosted while she is at reduced size, to the extent that she can bend a one-inch diameter steel bar almost double.

Retrieved from "https://marvelcomicsfanon.fandom.com/wiki/Janet_van_Dyne_(Earth-61615)?oldid=254579"
Community content is available under CC-BY-SA unless otherwise noted.