Somehow between the two of us, I'm both the brains and the brawns.

Janet van Dyne helped discover Pym Particles, and went on to become the size-changing superhero the Wasp. She would later become a founding member of the Avengers, and she and her team were eventually recruited by Nick Fury to join the Ultimate Alliance and fight against the Cabal. 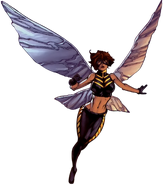 Hope van Dyne
Add a photo to this gallery
Retrieved from "https://marvelcomicsfanon.fandom.com/wiki/Janet_van_Dyne_(Earth-6110)?oldid=251998"
Community content is available under CC-BY-SA unless otherwise noted.