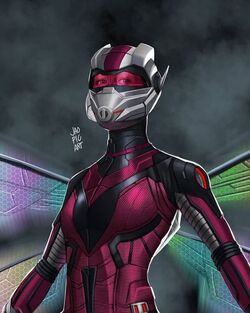 Hank Pym is dead. That makes me the world's leading expert on the Microverse technology, so maybe you should shut your stupid metal face, and let me do my job.

Janet van Dyne became the superhero known as the Wasp after she and her husband, Hank Pym, developed quantum suits capable of altering their size.

The two would go on to fight alongside their teammates in the Avengers when the Order of the World Tree launched their siege on Midgard. While they both survived the initial attacks, Wasp later witnessed her husband's murder at the hands of their former teammate and friend, Thor, who had been brainwashed into becoming the Enchantress's new Executioner.

Barely able to survive Thor's onslaught of his former teammates, the Wasp was able to escape to Doctor Doom's established safehaven in Latveria. Once there, she teamed with Doom himself, as well as Tony Stark, Susan Storm, and Abigail Brand to develop the AI F.R.I.D.A.Y.

Retrieved from "https://marvelcomicsfanon.fandom.com/wiki/Janet_van_Dyne_(Earth-2001)?oldid=261563"
Community content is available under CC-BY-SA unless otherwise noted.