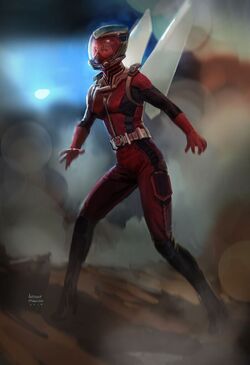 Oh wow, I know you're a supervillain and everything, but your real crime is assaulting us with that outfit.

Janet van Dyne always had an aptitude for science at a young age. She liked working through equations in her free time, but her true love was always fashion design. She even ended up going to school for it and quickly became famous for her designs, but also for her intellect.

It wasn't long until she caught the attention of Hank Pym, one of the world's most renowned scientists. Back in his prime, Hank had been the government-sponsored superhero called the Ant-Man. However, he denied these claims and buried the secrets behind the Pym Particles.

However, Janet applied herself and was quickly able to figure out the equation for herself. She even built a Wasp suit without telling Hank, and when he found out he was enraged. However, after seeing a demonstration of the suit, Hank became inspired and starting work on a next-gen Ant-Man suit.

Around this time, Janet began seeing her mechanic, Scott Lang, an ex-con with a masters in mechanical engineering and a 15-year-old daughter, Cassie. When Scott found out about Janet's extra-curricular activities as the Wasp, he became enamored with the possibilities and, wishing to make amends for his past crimes, became the new Ant-Man.

Over time, Ant-Man and the Wasp gained small town fame, and eventually crossed paths with the Avengers during a confrontation against the Advanced Idea Mechanics. Once victory was their's, the Avengers extended an invitation to the two of them, making them the first people to join the Avengers following their formation.

Average Strength, Increases Depending on Size