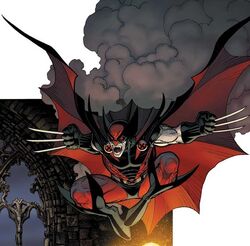 Single
Origin
Origin
Once only the lead mutant X-Man, Wolverine became a vampire and led a new X-Men team after the NEW! relaunch.
Creators

I'll be damned if the X-Men don't walk in the light just because I can't. But they'd still better watch out for me at night.

Wolf's history is exactly the same as that of Earth-616's James Howlett up until the Marvel NEW! relaunch.

Wolverine was successfully infected as a vampire by Jubilee. He was unable to fight it off because it was a supernatural infliction. But he was able to create a new team of X-Men to fight Cyclops' team. Eventually, he was capable of burning off the curse, allowing him vampiric powers similar to Blade. He formed the Midnight Sons to fight the supernatural, and led the X-Men in the field.

Vampiric: Wolf has the abilities of a common vampire:

Retrieved from "https://marvelcomicsfanon.fandom.com/wiki/Jamiel_Howlett_(Marvel_NEW!)?oldid=255259"
Community content is available under CC-BY-SA unless otherwise noted.