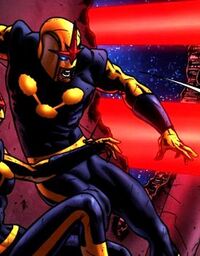 James Walker had been the leader of his own team on a special unit of the F.B.I. for many years. He retired after about five years because he was tired of it. He was sent to Washington where he became apart of the Metro Police Force. After only several months, Walker was transferred to the NYPD. It was here that he met Detective Brian Van Patrick.

Van Patrick needed a partner to help him find the serial killer, Johnny Corwin. Walker jumped on the opportunity to work on a new case. They worked well together because they were both determined to find Corwin. Soon after, the NYPD received a tip that Corwin and his accomplice were hiding out in an abandoned apartment complex. Walker and Van Patrick were the first on the scene.

Van Patrick ran into the building and James soon followed. James and Brian kicked down the door to Corwin's room and they saw him and his accomplice. A firefight erupted inside the room. All of a sudden, the building began to shake. James looked out of a nearby window and said that the building was flying. The shooting stopped and everyone looked outside. Corwin was still focused on trying to kill the officers and he fired at them when they had their backs turned. They were both hit and Corwin moved in for the kill. Before he could pull the trigger, Corwin and his partner disappeared.

The building landed, so Walker and Van Patrick went outside. They were somehow in the desert. It appeared that a war of some kind had taken place before they arrived. Then Brian and James heard two voices calling out to them. They discovered two men who were mortally wounded. They called themselves Nova and Quasar. The two explained that they had been fighting a battle against the cosmic being known as Galan[1], and his heralds. Their fight erupted in space and after Galan was wounded, he came to Earth to recuperate. Nova and Quasar followed him to end the battle. The team managed to destroy all of Galan's heralds, but at the cost of most of their energy. They were powerless against Galan. In one last effort, they sought out two replacements. It happened to be the duo of Walker and Van Patrick. The building was brought, but they didn't know about the other two inside. Galan had claimed them to become his new heralds.

The Xandarian Worldmind[2] chose James to be the dying Nova's replacement. Quasar gave Brian his Quantum Bands and he became the new Quasar. Nova and Quasar's final wishes were for James and Brian to stop Galan and his new heralds. They informed their replacements of Galan's last known location and then died.

Quasar and Nova went to the area and they found nothing. However, Quasar's Quantum Bands detected Galan's trail. The duo followed it and they could see an enormous figure in the distance. When they arrived, the two were face to face with Galan. They attempted to destroy him, but they were stopped by his newly created heralds. Corwin had been transformed into Proteus and his murderous girlfriend became Stardust. Proteus had his sights set on Quasar and he went after him. Stardust charged towards Nova.

Nova managed to defend himself against Stardust's attacks and whenever he went on the offensive, she seemed to not notice his attacks. Nova saw that Galan was giving his heralds a constant supply of cosmic energy. Quasar saw this as well and he told Nova to destroy Galan and he took on both Proteus and Stardust. Nova went after Galan and attacked him with his full force. He was soon joined by Quasar in the fight. They were succeeding in their battle against Galan and were close to ending him. Galan emitted a cosmic shockwave that pushed back Quasar and Nova. He called for his heralds to defend him. They came to his side and turned on him. With their incredible power, the heralds tore their former master apart. Proteus absorbed some of Galan's cosmic abilities. He pointed at Quasar and Nova and sent a blast at them. Nova pushed Quasar aside and was hit by the blast. When Nova opened his eyes, he discovered that he was in space. Proteus teleported him away so that he could focus on Quasar. Nova channeled all of his Nova Force to propel himself through space back to Earth.

In a few short months, Proteus with his allies and followers took over the planet. He successfully exterminated most of the heroes and villains. Quasar constantly fought Proteus and Stardust alone, but they became too powerful. When Nova returned from space, he joined the fight with Quasar. They gathered dozens of heroes and villains alike to fight Proteus, but they were still defeated. As their numbers lessened, Proteus' grew. The only fighters remaining were apart of an underground resistance led by a man called Hyper-Shadow. The group constantly planned attacks and then Quasar's bands detected that Proteus left the universe. They took this opportunity and found victory. While Quasar and Nova fought Stardust, the Resistance fought and defeated nearly all of Proteus' followers. The Scarlet Spiders focused on the people that Proteus converted into his personal heralds.

The Resistance morale rose dramatically after the win. While talking with Nova, Quasar detected Proteus was returning, but with someone else. Quasar, Nova and the Scarlet Spiders would go on a covert mission to find out who the other person was. They arrived beneath Proteus' tower in the sky and Quasar sent the Scarlet Spiders up to do recon. They crawled around the building and returned with information. Proteus was torturing someone and no one else was in the tower with them. Quasar and Nova wanted to take this opportunity to destroy Proteus. They flew to the tower and left the Scarlet Spiders behind. Nova blasted the top portion of the tower off to get Proteus' attention. He came out and Quasar and Nova began their assault. While they were fighting, Spider entered the tower to find a wounded man. He picked him up and glided down towards the ground. The Scarlet Spiders returned to base with the wounded man. Quasar and Nova continued their fight with Proteus. Proteus knew he was losing the fight, so he retreated to space and left a cosmic bomb in his place.

Quasar constructed a giant hand and grabbed the bomb. He used all his might to throw it into space after Proteus. He and Nova went back to base to find out the situation. The man that Spider rescued, looked as if he were going to die. He woke up and said his name was Tyson Rios. Tyson adjusted to a new universe well and he joined the resistance. He did not know that Tyson Rios was the name of the Resistance leader, Hyper-Shadow. Nova was good friends with Hyper-Shadow and he knew the arrival of his alternate self would lead to one of their deaths. Hyper-Shadow was the one to die during battle and he asked Tyson to take his place. Nova persuaded Tyson to follow his friend's last wishes. As Crimson Shadow, Tyson became the new leader of the Resistance and he brought a glimmer of hope in the battle against Proteus.

Master Tactician and Strategist: Walker is an accomplished strategist. He is able to formulate battle strategies and his brilliant tactical sense allows him to just as quickly alter any strategy of plan to fit the need of the situation change.

Master Acrobat: His years of training have made him an expert in the field of acrobatics and gymnastics as well as a stunning aerialist.

While his strength limit is unknown, he has shown enough strength to 100 tons without effort.

Walker's inexperience with the Nova Force causes him not to be able to use his powers to their full extent.

The helmet contains radio circuitry enabling Nova to pick up radio transmissions, monitor transmissions, telescopic sights, night vision sensors, and heat imaging sensors, as well as overlay a visual heads-up display for tracking energy signatures. The helmet also contains a psynaptic scrambler to use on opponents in close quarters. Nova's helmet has a rigid construction and shape when worn, but becomes as malleable as cloth when it is not, allowing Walker to hide it in his civilian clothes when desired.
Transportation: Flight under own power
Weapons: None known.

Retrieved from "https://marvelcomicsfanon.fandom.com/wiki/James_Walker_(Earth-826)?oldid=148297"
Community content is available under CC-BY-SA unless otherwise noted.