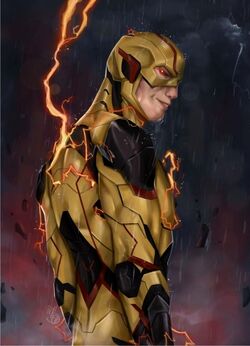 The Red & Yellow Blur,
The Murderer of Quicksilver
Identity

James Sanders had the same exact history with his younger reality alternate counterpart, right he finally decided to retire his life of crime for good during the final days of the last known glorious event of the 21st century, recognizably known by many as the "Golden Age of Heroes." However, as the Golden Age of Heroes was on the verge of an end, since most modern age heroes on Earth were forced to go into retirement due to old age or had already died, started a new rise of dystopia throughout the entire planet for the next several centuries, known as the "Dark Ages of the Heroic Era." Thanks to Sander's unique physiology as a powerful speedster, the effects of his cosmic powers had made him physically and chronically immortal, as if he has a never age for several years of his whole life as the infamous Speed Demon.

Realizing that most of his former teammates within the now dismantled Thunderbolts were either dead or retired with their loved ones, Sanders ended up becoming lonely with having nothing to do in his unproductive life now that the people he considered as his only family were gone, to which he often oversimplifies his loneliness to his associates as "being really bored." Later on, Sanders would continuously achieve several progressive self-discoveries in using his cosmic speedy powers after learning more about the nature of his powers that was the Power Primordial, Sanders founded a notorious gang of professional criminals, mostly as thieves and mercenaries, consisting of his own time remnants known as the Speed Demons.

After centuries of advancement and warfare which were participated by the Speed Demon and other old and new villains, remarking that "it was fun while it lasted," peace and prosperity was eventually brought to the land by the contributions of the remaining heroes. Since those notable heroes, with Nathan Richards being one of them, had brought peace to this war-torn future, they became known as it's most renowned legendary benefactors, where he was recognized for annihilating the last known conflict of the Dark Ages that occurred across the entirety of the Eurasian Plate caused by the great hundred years war between Apocalypse and Lord Sinister. In both the villains' defeat, Sanders cleverly and swiftly went into hiding from the now strict authorities sent by the United Nations, who already had access to dampen an enhanced individual's powers and abilities if necessary, especially if they've gone rogue and chaotic.

The men of this age futuristic and improved technological inventions had also greatly helped him most of humans from aging biologically and consistently makes them to live pass into the future, reaching to a time by the end of the 30th century where humanity had gone pass and had been fully recovered from the Dark Ages. During the next several hundred years leading towards the 40th century, this generation's supreme scientists have successfully improved the nature biology to the point that they seem to age much slower than 21st century man. Despite Sander's mockery at this significant achievement by humorously thinking humanity was "so slow in catching up," little did he know that the stored mutated essence of him that was formerly owned by Hydra during the 21st century, was one of the essential ingredients in making the longevity serums to begin with, a contribution that became a beneficial step to humanity's progression on the face of the Earth.

By the next generation of the 40th Century, when the despaired Nathan Richards slowly went insane and delusional after the timely death of his wife, Cassie Lang, subsequently turning him into embracing his own prophesied destiny, becoming Kang the Conqueror at last. Only days after becoming Kang, he started his conquest, subjugating several nations of his on choice to his will, starting with the Americas. As he gains a godlike power and infamous recognition among the non-colonized countries from time to time, Kang and his unstoppable forces wrought terror and nightmares throughout the entire globe. When Kang decided to travel back in time in a scheme to manipulate the modern age and somehow conquer all of history step by step, Kang left his power of authority and leadership of his empire to his second-in-commands, who were none other than Sanders and Ravonna Renslayer, becoming the de-facto leaders of Kang's Empire while their superior was not around his home reality. As a lieutenant of Kang, Sanders and his league of Speed Demons would often scatter across the ruled territories of Kang's control across the globe to hunt and take down any opposer or rebel, mainly in the Americas, which was the Conqueror's largest colony at that moment.

Hunt for the Insurgency

To maintain control over the following countries he has conquered, Kang and his minions of death sought out almost every rogue superhuman (e.g. mutates, mutants, even Inhumans) in those following countries and forced to serve him as his enforcers, and killed the ones who refused to do so. Reading the whole list of individuals who were slain by Ravonna and the lieutenants under Kang's extreme principle would go on for ages, although it included the famous mutate gunslinger Bret Colby and slaughtered his team, which were allegedly the future counterpart of the prime Ultimates, with the exception of Spider-Man of 3099, who allegedly was able to escaped back into hiding into an unknown location, despite getting critically wounded by his fellow lieutenant, Ravonna Renslayer, the Terminatrix. Throughout the next few years, Sanders, along with the Kang Empire's other lieutenant commanders, have helped Kang consistently instill a never-ending series of fear and terror across most parts of the globe in her role as one of the leading enforcers of the great conqueror.

However, by the time Kang had realized his cyclic and prophesied fate and came up with his new conquest and crave for absolute power to conquer time and history itself, the latter truly trusted Sanders as he appointed him, with the strict and skilled Terminatrix as her right-hand man, to be the acting leader of the Kang Empire before leaving through the timestream to try and fulfill his own mission in the past, and his own destiny someday. At the moment of Kang's absence, Ravonna became the temporary ruler of the Kang Empire, giving her full power to what Kang has been controlling for the past known years since he first attacked his own world, much to Sanders' disappointment that Kang would rather appoint Ravonna as the de-facto leader, than Sanders, whom Kang had already knew even before Nathan Richards became Kang in the 21st Century.

Unfortunately for Ravonna Renslayer, the latter started to slowly feel a sudden but extreme pain in her chest area, to which in timing, her fellow lieutenant and one-sided rival that was Sanders, revealed what he secretly did to her in her "free times," indirectly telling Ravonna that he already knew of her recent activities and new plan to end the reign of Nathan Richards, thanks to his natural powers of hyperspeed, time-travel, and sense of a disturbance across the space-time continuum, a newly-discovered ability that he learned after his space-time shattering fight with the time remnants of Quicksilver and other speedsters who came to confront Sanders for his irresponsibility and abuse of power as a speedster. Much to Speed Demon's disappointment to Ravonna's unexpected betrayal, he decided to follow her at some point in her adventures and secretly shatter her heart, slowly from the inside through the speedster's use of a special ability to slow down her suffering.

Seemingly those to James Sanders of Earth-61615, only some of his powers and abilities were significantly heightened due to his future experiences and several cases of both temporary and permanent enhancements, which could be also both unleashed from internal and external sources.

Seemingly those to James Sanders of Earth-61615.

Seemingly those to James Sanders of Earth-61615.

Retrieved from "https://marvelcomicsfanon.fandom.com/wiki/James_Sanders_(Earth-6164)?oldid=267308"
Community content is available under CC-BY-SA unless otherwise noted.