See also Captain for a complete list of references to distinguish between these closely named or closely related articles. 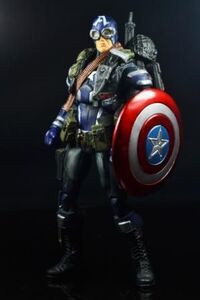 The Captain is the child of Black Widow and Captain America. He formed and was the leader of the original incarnation of the Avengers of his world, but later lost this position to Time-Lord. Despite having no actual super-powers, the Captain is an asset to his team, and well loved by the world he protects.

James Rogers was born on a breezy summer day, according to Captain America. He had a warm childhood. He was home-schooled for early years, so he could also be taught combat by his parents. He loved his parents, but not when they decided to send him to public school, starting at middle school. These years would change James, not even because he began aging rapidly.

When he graduated from high school, he decided to join the Army, since he had a sufficient knowledge of Cap's history and combat knowledge. He joined under the name Captain America, which the elder Rogers let him have, and stayed for 6 months. He enjoyed recounting days of Captain America's yore, but felt something was missing. So he left camp in the middle of the night, and was on the next flight home.

Upon returning home, both of his parents were delighted to see him. Captain America was a bit upset that he just up and left the Army, but he said he felt out of place there. Cap left him. Meanwhile, there were rumors of villain trouble making a comeback. So James removed the "A" from the top of his costume, removed his army gear, and set out to recruit a new generation of Avengers. He was successful in recruiting Iron Knight, Spider-Web, and Ghostdevil. Later, his quartet would be joined by Howl and Odinforce. With the arrival of the All-New All-Different Avengers line-up, the Fantastic Five, and a brand-new, revamped X-Men roster came protection the world had never seen. And James was proud to have started a new era in super-heroics.

The Captain has no actual super-powers. However, he inherited the Super-Soldier Serum from his father's blood. It gives him the following abilities:

Artificially Enhanced Body: The serum gave him the physique of a bodybuilder, but without having to work for it.

Peak Human Strength: The Captain has been seen bench-pressing over a 1/2 ton.

Peak Human Stamina: The Captain is capable of fighting for hours without tiring, as the buildup of fatigue poisons is slowed.

Peak Human Reflexes: Rogers is capable of dodging gunfire at point-blank range. He is the fastest human in this aspect.

Peak Human Healing: Rogers can heal at 3 times the rate of an ordinary human. This ability makes him immune to things such as hypnosis and telepathy.

Peak Human Senses: Rogers is capable of tasting, seeing, feeling, hearing, and smelling things that no other human can.

Enhanced Lifespan: It is widely thought that the Captain is capable of living for 150 years, if not more.

Rogers' main asset in combat is not his super-serum, it is his abilities. Combat knowledge and tactical skills give the Captain his prowess.

Master Martial Artist: The Captain has been trained by both of his parents in hand-to-hand combat, and has mastered boxing, judo, karate, savate, and kung fu.

Expert Acrobat: Rogers is capable of beating an Olympic-class gymnast.

Expert Marksman: James has been taught in how to shoot and is skilled in knife-throwing, and the skills of a bow and arrow.

Master Shield Fighter: James has used his father's shield for most of his life, and now is capable of wielding it in combat.

Master Tactician: The Captain has been taught battle strategies his entire life through the game of chess, and he can now devise complex battle plans in his head.

Indomitable Will: Rogers is immune to nearly every form of persuasion. He is even immune to most telepaths.

Weapons Proficiency: James can use most known weapons with minimal difficulty.

Multi-Lingual: The Captain has been taught English, German, Russian, Japanese, French, and Chinese, and carry on a basic conversation in each of these.

Master Spy and Hacker: Rogers is well-versed in the arts of breaking and entering, bypassing firewalls, and hacking nearly any computer, no matter how well protected it is.

Equipment: Costume contains tear gas, small firearms, a radio, and other supplies. His costume is bulletproof, fireproof, and capable of adhesion, though James does not know of this. The gloves are capable of projecting electricity.
Transportation: None known.
Weapons: James utilizes his father's shield in combat.

Retrieved from "https://marvelcomicsfanon.fandom.com/wiki/James_Rogers_(Earth-1175)?oldid=58083"
Community content is available under CC-BY-SA unless otherwise noted.