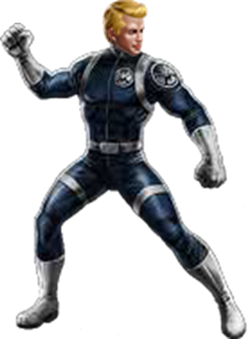 I will avenge her

James Roger was born in New York City. He lived a normal life with his girlfriend Rebecca Shaffer until she died, and Colonel Nicholas Fury offered him her spot as a S.H.I.E.L.D. Agent.

This was actually a whole lie made by S.H.I.E.L.D. to get James to join S.H.I.E.L.D., as Rebecca is alive and dating James' friend Rafael Sosi. James takes this as treason and leaves the Organization.

However, after a fight with Black Suit Spider-Man, he got a part of the symbiote attached to him, turning him into Torment.

James Roger possesses the normal human strength of a young male, and with his own height and build who engages in extensive regular exercise. However as Torment he possesses enhanced strength

Retrieved from "https://marvelcomicsfanon.fandom.com/wiki/James_Roger_(Earth-1010)?oldid=150263"
Community content is available under CC-BY-SA unless otherwise noted.