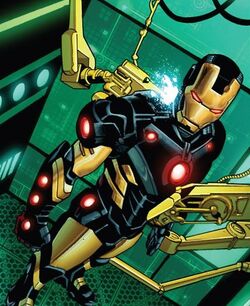 Single
Origin
Origin
After abandoning his duplicate life, Rhodes was given a new armor from the deceased Stark to resume his War Machine role.
Creators

Destiny has intervened, and I'm in an armor again. He made it for me, specially for this gig. I hope it's his sign he's done. He isn't fit to be Iron Man. This time, I'll put my soldier tactics to good use. May God have mercy on our foes.

War Machine's history is exactly the same as that of Earth-616's James Rhodes up until the Marvel NEW! relaunch.

Rhodes has no powers.

Rhodes is a skilled combatant and tactician.

Equipment: War Machine Armor: Rhodes wields the Mark 3 version of the War Machine armor. It enables him to perform these functions:

Retrieved from "https://marvelcomicsfanon.fandom.com/wiki/James_Rhodes_(Marvel_NEW!)?oldid=139260"
Community content is available under CC-BY-SA unless otherwise noted.