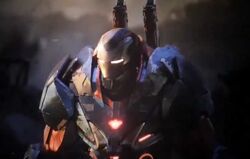 They don't call me War Machine for nothing.

James Rhodes has been Tony Stark's best friend since college. He later joined S.H.I.E.L.D. after Tony built him a suit of armor and became the War Machine. After Apocalypse rose to power and destroyed S.H.I.E.L.D., War Machine went on to join the Avengers.

However, not long after Iron Man became coopted by Ultron, he ended up doing the same to both War Machine and Rescue. After his mind was transferred into a robot copy of his armor and rewritten by Ultron, Rhodes became a merciless killing machine with absolutely no regard to human life.

Retrieved from "https://marvelcomicsfanon.fandom.com/wiki/James_Rhodes_(Earth-9999)?oldid=246005"
Community content is available under CC-BY-SA unless otherwise noted.