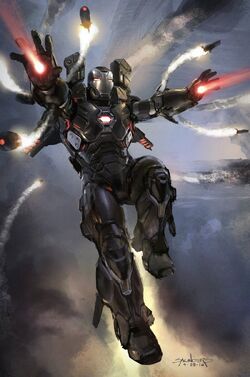 James Rupert "Rhodey" Rhodes, born in the early to mid-1970s, is a lieutenant colonel with the United States Air Force and liaison between the military in the Department of Acquisitions and Stark Industries, where he became close friends with his now best friend, Tony Stark. When Stark had been kidnapped by the terrorist organization Ten Rings, Rhodes personally led a mission to rescue his best friend. However, upon their return, Rhodes saw Stark moving away from developing his weapons for the military and soon discovered that he was instead focusing on becoming the hero everyone know today as Iron Man. Despite all of his fears for his friend's safety, Rhodes still joined Stark in bringing down Obadiah Stane's schemes, while trying to keep Stark's secrets, only for Stark to reveal them to the media himself during a public conference held for him.

With Iron Man's identity known, Rhodes found himself under pressure from the United States Congress and the military to take possession of the armor for himself, something that he was against. However, as Stark's reckless behavior got even worse, Rhodes had no choice but to take one of the prototype Iron Man armors before handing it over to the military, with Justin Hammer upgrading it with his new weapons to rebrand Rhodes as War Machine. After the confiscated Mark II armor was upgraded to become the heavily armed War Machine armor at Edwards Air Force Base, it was taken for a demonstration at the Stark Expo with Rhodes as its pilot. However his armor fell under the control of Ivan Vanko and Rhodes was forced to watch helplessly from within the suit while it attacked Stark.

The War Machine software was eventually rebooted by S.H.I.E.L.D. agent and their ally Natasha Romanoff enabling Rhodes to regain control over the armor once more. Going according to his plan, Vanko returned and attacked the Stark Expo with an army of Hammer Drones, as War Machine willingly teamed up with Iron Man to bring him down. Rhodes then teamed with Stark to fight against Justin Hammer's unmanned drones and then Vanko himself, resulting in Rhodes keeping the armor for himself, despite Stark's continued objections.

With his newest armors, Rhodes was given the chance to take on the identity of the Iron Patriot and temporarily worked directly for President Matthew Ellis, with a mission to track down the Mandarin, only for Rhodey to politely take down the offer of becoming a the armored Patriot, which is something he would refer to as a "pain job." However, Rhodes had soon discovered that the Mandarin was, in fact, a ruse created by Aldrich Killian by hiring actor Trevor Slattery to portray the role, as Killian managed to capture Rhodes and steal the Iron Patriot Armor, as Killian's henchman, Eric Savin, then used it to kidnap President Ellis as part of his ongoing "Mandarin" war. Rhodes managed to free himself and teamed up with Stark to defeat Killian's army of Extremis Soldiers and save President Ellis before Killian could publicly execute him, as Rhodes also uncovered Vice President Rodriguez's role in Killian's plan, leading the the former's arrest afterwards.

Months since Aldrich Killian's campaign, the infamous Movement Alliance conducted a series of massive terrorist attacks all over the world destroying the Brooklyn Bridge, Golden Gate Bridge, Eiffel Tower, Taj Mahal, and even the Great Wall of China, killing over 1,500 people on the very first day. Consequently, all the Movement's opposing adversaries, the heroes (including Rhodey), were united into creating their own Ultimate Alliance, in order to stop and prevent the Movement from commencing its schemes upon world domination and unified evil sovereignty, before its too late.

As a consequence of the entire world after the unfortunate events of Ultimate War, the Superhuman Registration Act was eventually implemented, which were a set of legal documents designed to regulate the activities of enhanced individuals, specifically those who work for either government agencies such as S.H.I.E.L.D. or for private organizations such as the Avengers, Defenders, and many more. Established by the United Nations and ratified by 117 nations, the act serves as a "middle point" between the Avengers' desire to secure world peace and the international community's concern over the repercussions of the actions caused by many superheroes all around the world. However, this led to a major schism and conflict among the super-powered community, with one side (led by Captain America) opposed to the act resisting registration and the other side supporting registration and trying to enforce the new law, led by Iron Man himself, since he serves as the front face and leader of the Registration in the United States.

Days after the climactic end of Civil War, Rhodey willingly participated in the 50-State Initiative recruitment and training program, despite Stark's advice not to, with the latter believing it would be better if he stays serving the President like he did before. Through as yet unknown circumstances, Rhodey was critically injured at some point during the cold conclusion of Civil War after battling a group of Anti-Registration rebels overseas, and had some of his arms and legs were replaced with cybernetic prosthetics. Having been returned to the Avengers Tower, Rhodes had then continued his recovery, with the assistance from Stark who had built him a new device that could help him walk again, but Rhodes had problems to adapt to it, although his best friend and other loved ones couldn't even stop supporting him to rise up and walk again. As a result of his slow but progressive recovery, Rhodey had to retire from the mantle of War Machine in the meantime, leading him to live a short normal life for a while.

Throughout Rhodey's long time recovering from his paralysis after Civil War, he and some of his friends, mostly his former fellow comrades in the army, decided to take a relaxing vacation in Doos an' Don'ts, a rodeo drive located in Los Angeles, as Tony once suggested him during their earlier days as close friends. There, he met Rae LaCoste, a former hairdresser who previously had a one-night stand with Tony Stark himself, much to Rhodey's slight annoyance and confusion to how many women have Tony across the United States. Despite this, however, Rhodey started having romantic feelings for Rae, and the latter would reciprocate his feelings after finding out his interest in her, though he was still somewhat bothered by her past with his own best friend, making him doubt whether or not he should have made a move to her in the first place. Once Rae found out about his troubles regarding her past with Tony, she calmed him and sincerely told him the truth, that her relationship with Tony was actually just a "one-time thing," and was never exclusive or committing to begin with. Thus, after that moment of truth, both Rhodey and Rae finally started their committed relationship as a couple, spending the rest of their days joyfully traveling across Los Angeles and its neighboring states.

A stealthy invasion secretly planned by the ruthless Skrull race comes to fruition, as the Ultimates (both the 50-State Initiative of Iron Man and the Anti-Registration Forces of Captain America), S.H.I.E.L.D., the Thunderbolts, the Dark Avengers, and most of the Earth's super-powered individuals must unite to stop the conquering villainous extraterrestrial race, aided by the cosmic heroes, the Guardians of the Galaxy and the entire Ravager Network. In the ensuing attempted invasion, Rhodey had no other choice but to delay his quality time with Rae and help out his once again by donning the War Machine Armor, something that he has never done for months due to his recovery. During the end of the fighting, a seemingly reformed Norman Osborn, who was doing by the heroic ironed persona of the Iron Patriot, killed the escaping Veranke, the Skull Queen, which ended the war and the attempted invasion, once and for all.

At the time, the legal documents that is the Superhuman Registration Act, remained implemented right until the aftermath of the Secret Invasion, where both leaders of both sides, as it was first demanded by Stark for his old friend, demanded the United Nations to finally abolish the act, after both sides reunited into saving the Earth from the Skrull Invasion, ultimately ending the Superhuman Civil War, once and for all. Only a few moments after the conflict was declared a victor for the heroes and villains of Earth, Rhodey almost immediately leaves the battlefield decided to fly to Rae in her home back at Los Angeles, where they both happily reunite as they hug and kiss passionately. Their love for each other would later on prove to be one of the strongest there is, as Rhodey would later propose to Rae months before the infamous Infinity Quest, with the two subsequently getting married. Eventually, Rhodey and Rae would conceived twins, named Rupert (named after Rupert, his presumed middle name) and Toni (daughter named after his best friend, Tony), during the early days of the Heroic Age.

Cybernetic Enhancements: James Rhodes originally has no powers of his own but has access to various capabilities built into his War Machine Armor, a high-tech suit of armor that grants him the following abilities. However, after being severely injured overseas during the Superhuman Civil War as a enforcer of the Pro-Registration Act, Rhodey was partly rebuilt as a cyborg by Tony Stark. These cybernetics provided him with a number of new features:

Retrieved from "https://marvelcomicsfanon.fandom.com/wiki/James_Rhodes_(Earth-61615)?oldid=234070"
Community content is available under CC-BY-SA unless otherwise noted.