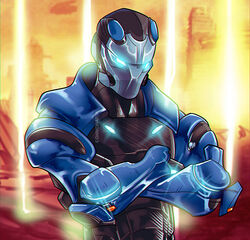 Avengers, Guardians of the Galaxy
Universe

I'm glad you guys are all having a good time on Earth trying to prevent the apocalypse. Meanwhile I'm out here cleaning alien sludge out of the cracks in my armor, so I think we all know who the real winner here is.

James Rhodes was a high ranking Colonel in the United States Air Force. He did most of the dealing between the military and Stark Industries for weapons sales. Over time, he and Tony Stark became best friends, and when Stark was abducted during a presentation by the Ten Rings, Rhodey led the manhunt to find him.

He later became the first person to discover that Tony Stark has since been acting as the superhero Iron Man, and agreed to keep it under wraps. However, things got complicated after Tony revealed his identity to the world. Rhodes was put on trial due to his suspected involvement, and ended up retiring his rank in the military. Not long after, he found himself donning one of Tony's old armors to save his life after he was kidnapped by the Mandarin.

Ever since, Tony has started manufacturing "War Machine" armors exclusively for Rhodey. Since making his debut as Iron Man's partner, not sidekick, which he constantly argued with Tony about, he was invited to become the head of the Secret Service by President Wesley Marshall. He accepted the job and became the protector of the United States's sovereignty, which earned him the nickname Iron Patriot.

Eventually, War Machine joined the Avengers as an attempt to legitimize the team's status. Since then, he has become good friends with many of his other teammates. After Tony, Captain America, and Thor returned from the future with warnings about the Prophecy of Infinity, Rhodey volunteered to help lead the space-faring front of preventing the future.

He and Tony then worked together on developing a new suit of armor capable of deep space travel, War Machine jetted off and began working alongside the Guardians of the Galaxy as a liaison between the two teams.

Retrieved from "https://marvelcomicsfanon.fandom.com/wiki/James_Rhodes_(Earth-101)?oldid=250671"
Community content is available under CC-BY-SA unless otherwise noted.