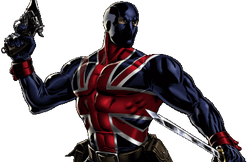 Lord Montgomery Falsworth was a British nobleman who became a secret costumed operative for the British government during World War II. Clad in a costume resembling the British flag, the Union Jack personified the fighting spirit of Great Britain even as Captain America would symbolize America's ideals and fighting spirit during World War II. As the British government intended, the mysterious masked figure of Union Jack also struck terror into the minds of the Germans, who came to dread his one-man commando-style actions against them.

In the later days of World War II Union Jack often operated a a member of a team of costumed operatives from America, Britain and France, known as Freedom's Five, who battled the Germans.

In England in 1942, Lord Falsworth befriended the Invaders, a team of costumed champions serving the Allied. Lord Falsworth again donned the costume of Union Jack in order to help the Invaders battle the returned Baron Blood, and was made an Invader himself. However, in a battle between Union Jack and Baron Blood in a cave beneath the Falsworth estate, the vampire hurled a massive boulder at Union Jack, crushing his legs and leaving him crippled. Union Jack managed to pry the boulder off his legs, causing the huge rock to strike Baron Blood, knocking him backwards. The vampire fell onto a sharp stalagmite, which harmed him and made him flee.

The Union Jack was still a member of the Invaders when World War II ended on the European front.

Towards the very end of the war Union Jack had grown disillusioned with war due to the bloodshed he had witnessed. In one of his final wartime missions, Union Jack was assigned by British Prime Minister David Lloyd George to investigate a series of murders of prominent British subjects many of them important military leaders. Union Jack finally found the culprit, the vampire Baron Blood, who served the German cause. Unknown to Union Jack, the masked Baron Blood was actually his own younger brother, John Falsworth. Union Jack fought the vampire and stabbed him with a silver blade, forcing him to flee and thereby thwarting Baron Blood's attempt to murder a leading member of Parliament.

At age of 69, James had his twin children, Brian and Jacqueline. According to files, he died in 1998 of natural causes.

Union Jack was a superb athlete and excellent hand-to-hand combatant.

Union Jack possessed the normal human strength of a man his age, height, and build who engaged in intensive regular exercise.

Retrieved from "https://marvelcomicsfanon.fandom.com/wiki/James_Montgomery_Falsworth_(Earth-1010)?oldid=120635"
Community content is available under CC-BY-SA unless otherwise noted.