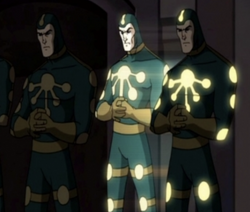 Duplicates Have Died All Over the World, Original Still Lives
Creators

Go ahead, kill me. I can always make more.

James Madrox is a mutant with the ability to create infinite duplicates of himself. This made him a special interest of Apocalypse, who recruited him to be a soldier in his Armada.

He was quickly selected by Mister Sinister to become one of his test subjects. The experiments resulted in each of Jamie's clones possessing a separate super power, some with super strength, others with enhanced speed or the ability to self-detonate.

He was then mass-produced to form an army of Multiples, each serving a separate purpose. The super strong Madroxes served as soldiers in the Armada. The fast Madroxes acted as black ops agents. Most importantly, the self-detonating Madroxes became suicide bombers. The real Jamie has since been placed in a suspended animation pod so that Sinister can breed as many clones as he needs.

Retrieved from "https://marvelcomicsfanon.fandom.com/wiki/James_Madrox_(Earth-9999)?oldid=245218"
Community content is available under CC-BY-SA unless otherwise noted.