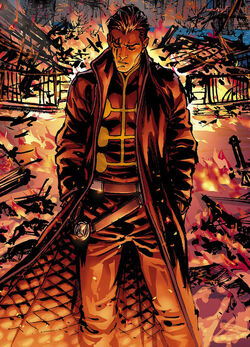 You what they say about me, I'm a one-man army... Okay, you know what? I take that back. I'm the only one who actually said that...

James Arthur Madrox and his unique mutant ability was apparent as early as his birth. He created his first duplicate when the doctor smacked him on the bottom to determine if he was alive as an infant. At some point weeks after his birth, Jamie and his parents were forced into moving to Madison, Wisconsin when they learned that their neighborhood and city was full of anti-mutants who has an extremely agressive approach and outlook towards the race. From a very young age, Madrox was given a special suit to wear from his father's unrevealed sponsors that would neutralize his mutant power whenever his outside their household, much to Jamie's annoyance as he grows up to middle adolescence, realizing that he couldn't get any chance of freedom to get the suit off him.

However, during a particular point in time when he was in ninth grade after he was playing football with his friends, he decided to unhesitatingly take out the suit in order to change his clothes for the first time in years without having the guidance and supervision of his father. While changing, his friend tried fetching him a soccer ball, only to fail and hit him, throwing him to the floor that triggers his mutant powers for the second time, or what he thought was the first time it surfaced in his life.

Confused, frightened, and driven mad by isolation since people had started finding out regarding his mutant status, Madrox felt himself drawn to New York City after running away from his parents and his childhood home. At the middle of the city, he even held a mutants' right protest all on his own with his duplicates. There, he was found by the mutant supremacist Magneto, even before Professor Charles Xavier did, who ruthlessly trained him and taught him to control and fully embrace his powers, before convincing Jamie to join he and his fellowship within the Brotherhood of Mutant Supremacy.

With it, Jamie finds himself a new consistent home for the next several years of his adult life at the remote island in the Pacific known as Genosha, a small mutant community also home to Magneto's Citadel. With his unique powers of duplication, Jamie was eventually dubbed the Multiple Man by both his closest allies and future enemies, most notably the X-Men.

As a part of the Brotherhood's vendetta against the oppression and injustice of humankind, he also participated with the rest of his fellow members when they were ordered in sneak into the Xavier's School for Gifted Youngsters during the night of their Homecoming Dance inside the X-Mansion, and kidnap Charles Xavier for Magneto's unknown mission.

The dupes of Jamie were executing their mission along with the rest of the Brotherhood, but the prime Jamie was later revealed to be heavily distracted once he met a young adult woman and fellow mutant by the name of Layla Miller, who first approached him during the dance seeing Jamie as a new student within the campus. Asking if he thought she was familiar, Layla actually reminded him that they've already met before while he was still in ninth grade as his aquaintance, much to Jamie's surprise after he immediately recognized her, knowing that she was also a late mutant as well. Unfortunately, Jamie's reunion with his past friend ended up short-lived after the rest of the Brotherhood's presence were finally exposed by a few members of the X-Men, subsequently blowing up Jamie's in the process, which also confuses Layla to question what has really happened to Jamie since he left their neighborhood.

Sadly enough, Jamie didn't have any sort of chance to explain everything to her, and he and the Brotherhood was forced to retreat back to Genosha after their failure of both defeating the X-Men and capturing Xavier, enraging Magneto to learn of Madrox's foolishness that distracted him in the first place. As a responsive punishment to Jamie's failure, the strictly-cruel mutant had Jamie tortured by his fellow member Hard-Drive using her branding technology, painfully marking a "M" brand over his right eye to "teach him a lesson" and warn him, not to get preoccupied whenever he was tasked to a particular mission, to which Jamie was reluctant to obey what his master had planned for him.

Despite the brutal punishment he had to experience at the hands of his own master, Jamie just couldn't stop thinking about Layla and because of it he decided to sneak himself out the island of Genosha countless times after creating a dupe (later dubbed as the Traitorous One by Magneto) in order to take his place in the meantime, not knowing that dupe would eventually inherit the notable personality of aggressively hating Magneto as time passes and even consider betraying him through any means necessary, just to visit Layla inside the X-Mansion and reconnect with her every once in a while.

During his several secret meetings with Layla, he was able to convince her that he meant no harm to the residents of the mansion, especially Xavier and the X-Men. As a result of this, Layla finally understood Jamie's reason of visit, rekindling their relationship since they've last seen each other. Layla was also able to convince and slightly Jamie about the noble and righteous cause of Professor Charles Xavier and the X-Men, with his pacifist ideology to have peace and equality between mutants and humans. Unbeknowst to Layla, Jamie started to have romantic feelings for her as time went on, something that he would care not admit to anyone, at least not until later.

However, it didn't last very long when James was unexpectedly tracked down by his unusual dupe who came all the way from Genosha, accompanied with some of his fellow members and someone mysterious by his side, proclaiming himself as the new leader of the Brotherhood. Jamie tried to defend Layla and prevent the Brotherhood from entering the mansion, only to be overwhelmed by his own dupe who was revealed to be highly mutated by a mysterious serum developed by the mysterious leader, and absorbed him afterwards, instead of the other way around, much to Layla's shock and surprise.

In the wake of Madrox Prime's defeat, the Traitorous One momentarily took over the prime body before resuming his service to the mystery man, seeing as if Jamie was already gone. For the next several days, Jamie was revealed to have broken his chain with Magneto's side, with him (or at least his rogue dupe) believing that the Master of Magnetism has been going soft since his latest negotiations with Xavier and the X-Men, and was willing to do whatever it takes to take him out of the Brotherhood's equaton, with the help of his new leader, and the upcoming sudden emergence of villainy across the entire world known as the "Movement."

Homo Superior Physiology: Madrox is a powerful and unpredictable mutant whose powers had manifest during his birth instead of during puberty. Madrox's powers include:

Retrieved from "https://marvelcomicsfanon.fandom.com/wiki/James_Madrox_(Earth-61615)?oldid=265671"
Community content is available under CC-BY-SA unless otherwise noted.