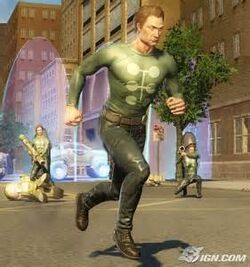 Little is known about Multiple Man's life before the Civil War. It can be assumed to be similar to his mainstream counterpart.

Multiple Man was one of the Anti-Reg heroes during the Civil War. He was among the reformed Ultimate Alliance. However, under unexplained circumstances, Multiple Man was assimilated into the Fold (as the nanite-enhanced Nick Fury was able to use his powers at the repeater tower in Iceland).

Equipment: Madrox once wore a suit that damped kinetic impacts so that he wouldn't duplicate from accidental impacts.
Transportation: Quinjet, teleportation pods
Weapons: None known.

Retrieved from "https://marvelcomicsfanon.fandom.com/wiki/James_Madrox_(Earth-6109.2)?oldid=128654"
Community content is available under CC-BY-SA unless otherwise noted.