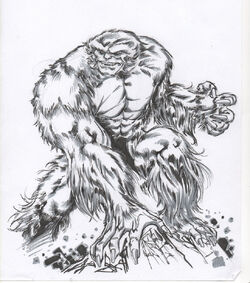 Sasquatch and Snowbird were teammates on Alpha Flight for a long time. They did not even really like each other. Snowbird admired Sasquatch, but he had no feelings for her. Despite this, they had a one-night stand. Since Guardian died the day before James was born, he was named in Guardian's honor.

Home life was pretty different for James than most people. His parents loved him, and truly wanted to spend time with him, but they just didn't. His mom was never around, and his father was still a scientist and Alpha Flight leader. So, James found ways to occupy his time. He often snuck into his father's lab, and read his papers, conducted some experiments, and things of the like. When he wasn't experimenting, or doing terrifically in school, he was out in nature, "hiking." Some days he really hiked, but after he discovered his mutant shapeshifting powers, he would often shift into a bird and fly around the Canadian wilderness.

One day, his father came home from work, and he was crying. When James went to comfort his dad, he found out that Alpha Flight disbanded with the deaths of everyone but himself, including his mother. After comforting his father, James fled in a panic, not knowing what to do. He realized how much he wanted to join Alpha Flight, but he couldn't. So he grabbed a bag, flew without shifting for the first time, and went to New York. His father occasionally talked of co-workers there...the X-Men. Upon landing, he revealed his origin, but no one believed him, so he shifted into his Squatch form and scared some people out of their wits. They reveled that they were in chaos as well, since the Skrulls had come to Earth and taken the team prisoner. They also revealed that they had been keeping tabs on him for years, and were just about to recruit him. Despite this, he saw it as a sign, and joined the rescue squad. After a long battle, which he was utterly unprepared for, James joined the team as Yeti.

Animal Morphing: James can shapeshift into most animals he can think of. However, he is always white, no matter what form he takes. He can shift into ANY animal, not just Canadian animals.

"Squatch" Form: James' "Squatch" form is his preferred form, it is a white version of his father's form. In it, he has these powers:

Sorcery: James has the ability to sense magic, and occasionally perform a counter spell or power negation spell.

James has great knowledge of hand-to-hand combat, and minor knowledge of mystical combat. He is an accomplished scientist as well.

Retrieved from "https://marvelcomicsfanon.fandom.com/wiki/James_Langowski_(Earth-1175)?oldid=255140"
Community content is available under CC-BY-SA unless otherwise noted.