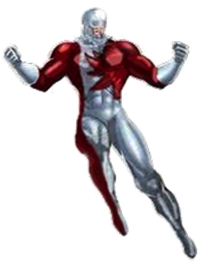 ALPHA FLIGHT! Glad to see you finally made it, people. Pick a "partner" and let's finish this fight.

James Hudson worked for the Am-Can Oil Corporation and developed his suit to help search for oil deposits underground. However, after hearing it was intended to be used as a weapon by Am-Can Oil and specifically his boss Jerome Jaxon, he resigned. Secretly he left with the suit's helmet, making the suit unusable. A young secretary named Heather followed him, explaining that she agreed with his decisions and that they could seek help from the Canadian government. They admitted they both had developed a strong attraction to each other.

In order to avoid prosecution for the theft of the super-suit, James made arrangements with the Canadian Parliament. The Minister of Defense assigned James to head up the Ministry's research and development program known as Department H.

Some time later, James and Heather encountered a 'wild man' in the woods while on vacation. James had to leave to find supplies. Heather was able to keep the man calm, believing he was not truly malicious. The man is better known as Wolverine, and has remained close with the Hudsons. Hearing about the Fantastic Four, James was inspired to form a team of superhumans to work for Canada, coming up with the name of Alpha Flight. He and Heather began recruiting members. Logan turned down Alpha Flight membership as he felt his presence and feelings for Heather would conflict with his friendship with James.

When Am-Can went bankrupt, the Canadian government took possession of the suit James had designed. Calling himself Weapon Alpha, James was ordered to capture his old friend Wolverine and bring him back to Department H. He was unsuccessful and accidentally wounded Moira MacTaggert. After this incident, he took the name Vindicator to redeem himself. On a few other occasions Hudson's Alpha Flight teams have opposed the X-Men.

His old enemy Jaxon formed Omega Flight to battle the team. Jaxon was killed while using the Box robot, but also had Guardian's suit overloaded to explode and kill him. James instead was sucked through a spatial rift.

James returned as a cyborg. Members of the Qwrlln race found him and seemed to think that the suit was a part of his body. Thus they bonded him to it while making repairs and healing his body. They altered him, thinking he would make a useful backup if Galactus arrived since they knew the world devourer had been stopped by Earthlings in the past.

They sent him back in a ship, but it was found by the Roxxon Oil Corporation. Roxxon attempted to use his computer systems. Madison Jeffries was also asked to help deal with "a computer problem." James's cyborg mind was too strong, so they attempted to cut him off life support. He responded by destroying the facility, but Jeffries was able to keep him alive. He was distant with the computer side often overriding his human side, which greatly troubled his teammates and wife.

Hudson's powers come from his suit and later cyborg conversion.

Hudson is an accomplished inventor and engineer, as well as a good hand to hand combatant. The suit has a very sophisticated navigation system. Hudson also seems to be able to hide his metallic features if he wishes so.

As a Canadian government agent Guardian's code name would be known in both official languages (English & French): Le Gardien. Just like the Royal Canadian Mounted Police.

Retrieved from "https://marvelcomicsfanon.fandom.com/wiki/James_Hudson_(Earth-1010)?oldid=256357"
Community content is available under CC-BY-SA unless otherwise noted.