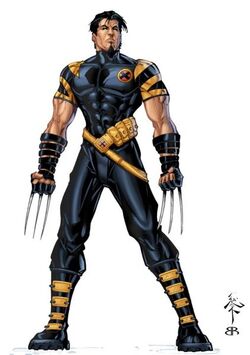 James Howlett Jr was born in 1892 the son of James Howlett Sr and Maria Howlett. James was born with a rare case of amnesia which causes him to forget who, where and what he is every 5 months or so.

One day while roaming the Howlett Estate sometime in 1899, he sees a young boy, maybe 3 years older than him named Victor Creed, he asks him if he's lost and Victor replies "No", James asks him if he has a place to stay, Victor lied and said no James asked his father if Victor could live with them and James Sr agreed, he then gave Victor a tour around the house, later that day Victor told Jimmy about himself and where he was from, James told Victor that he had a rare case of Amnesia which causes him to forget who, where and what he is, Victor and James decided to become friends for life and Victor gave James the nickname "Jimmy".

In 1899 Christmas day, Victor got James a diary so he can record events and remember who, where and what he is so he'll never forget, that was James' favorite present, Jame began writing in it straight away. 2 weeks later, Victors father Zebadiah came to the Howlett Estate furiously and demanded his son he stated that Victor would get the beating of a lifetime for running away, James Sr just thinks that he is insane and attacks him but Zebadiah shoots James Sr, this enrages James and the anger manifested his Mutant powers and his bone claws came out of his skin and rushes Zebadiah killing him, Maria then reveals that Victor is James Jr's half brother and that she cheated on James Sr, that made James even more angry and he wanted to kill her too but ran away into the forest instead, Victor then went upstairs and got James' diary and tore it all up and one of the pages went out the window and somehow made its way to James and hit him in the face, James looked at it and saw that it said "I have amnesia that occurs every 5 months, be cautious Ja- -" it said, the James was scribbled out so James will now forget his name. Meanwhile Victor swore vengeance on James

In 1901, James was asked his name but due to his amnesia James forgot and names himself Logan.

Sometime in 1914, a now older James heard about the war and decided he wanted to fight in it

Finding out about healing powers

In 1915, James was shot multiple times, but didn't die he then realized he had healing powers and it bought him respect in the army, but would forget 5 months later

After James had heard about another World War, James then got annoyed with the Germans and enlisted in the American Navy

In 1944. After proving himself a good soldier, he was assigned to Captain America's secret group where he would infiltrate HYDRA bases

James and Captain America's comrades were infiltrating a HYDRA base where they met the Red Skull. He and his teammates battled HYDRA forces while Cap fought Red Skull. Later on he'd had found out Captain America sacrificed himself in the explosion. This put James in a deep depression

In 1945. Weeks after Caps "death", Bucky was lost in battle but not dead. With now 2 of his comrades dead put James in a deeper depression

In 1946, James joined the Weapon X program and obtained Adamantium claws. They then tried to erase all of his memories and burn his piece of paper which made James furious so he attacked and killed them all.

Modern Age and joining the X-Men

Sometime in 2012, James lived in Canada and started to gamble and he owed a lot of people money but would scare them off with his claws. He was then approached by Hank McCoy and offered him a chance to look back into his memories and find out about his past, James agreed without hesitation.

Later on as an X-Man, James took the code name Wolverine, due to his beast personality

James and Victor meet after years

On a mission, James encounters none other than his half brother Victor who was on his trail for over 100 years, Victor then told James about his past and why'd Victor had been tracking him for so long, Victor then attacked James and the two battled out with not holding back

Victor was beating James and had finally knocked him out, James was almost killed until Cyclops stepped in and blasted Victor long enough for him to be taken back to the X-Jet. Later on James tells the group his real name and his past, when the X-Men had returned home, James wrote in his journal straight away

Wolverine possesses a variety of superhuman attributes similar to those possessed by his Earth-616 counterpart, though some of his powers aren't as developed.


Regenerative Healing Factor: Wolverine's primary mutant ability is an accelerated healing factor that enables him to regenerate damaged or destroyed bodily tissue with far greater speed and efficiency than an ordinary human. Wolverine is capable of healing from injuries that result in extensive tissue damage or loss such as multiple gunshot wounds, slashes, punctures, and severe burns within a matter of hours.

Adamantium Laced Skeletal Structure: Wolverine's entire skeleton has been infused with a rare, artificially created alloy known as Adamantium. As a result, Wolverine's bones have been rendered highly resistant to all forms of physical damage. However, there is evidence to suggest that the Ultimate Marvel Universe's version of adamantium isn't nearly as durable as its Earth-616 counterpart.


Retractable Claws: Housed within Wolverine's forearms are retractable claws that he is capable of releasing through the flesh between his knuckles at will. The claws rip through the flesh, tearing holes that are almost instantly healed by his healing factor. It became clear that the claws are bone laced with adamantium when it was discovered that Xavier temporarily developed them (as well as the rest of Wolverine's powers) when he used the first version of the drug Banshee, which was derived from Logan's DNA. The claws are as durable as the rest of his skeleton and are capable of cutting most known substances.

Wolverine is an experienced hand-to-hand combatant and is an expert assassin.

While the exact limit isn't known, Wolverine's strength is sufficient to lift around 800 lbs .

Retrieved from "https://marvelcomicsfanon.fandom.com/wiki/James_Howlett_Jr_(Earth-1315)?oldid=128202"
Community content is available under CC-BY-SA unless otherwise noted.