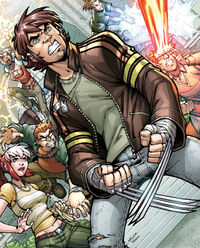 When Hydra's Weapon X facility was raided by S.H.I.E.L.D., a Hydra scientist that managed to escape recovered a blood sample of Wolverine.

Hydra scientists would then begin experimenting with Wolverine's blood and would eventually manage to clone Wolverine.

For the first year of his life, Hydra would perform non-harmful experiments on him. His "sister" would also be born in this year and would be named Laura. Jimmy would become protective of his sister and the two would become very close.

As a child, Jimmy and Laura's claws would manifest. Jimmy would develop three with the ability to coat his claws with a metallic substance at will, while Laura had two claws on each hand and one claw on each foot. Jimmy and Laura would be subjected to many tests and would be told of who their "father" was and be condition to hate him and want to kill him.

Laura couldn't coat her claws with a metallic substance unlike her brother and so Hydra would attempt to coat her two hand claws and single foot claws with Vibranium but was met with some resistance by Jimmy. Although Jimmy was restrained and could do nothing as they painfully grafted Vibranium to his sister's claws.

At the age of seventeen, Hydra would gain intel on Wolverine's location in Canada. Hydra would then order Jimmy and Laura to find Wolverine, capture him but do not kill him.

After a few days of using their superhuman tracking senses, Jimmy and Laura would find Wolverine outside a bar and attack him. Wolverine is no match for their martial arts skills and becomes enraged popping out his claws and attacking them which results with Jimmy and Laura attacking him with their claws as well. They proved a formidable match for Wolverine but he defeated the two and unmasked them. A confused Wolverine would be caught off guard and electrocuted and knocked out.

Wolverine wakes up and asks who Jimmy and Laura were to which a Hydra scientist would reveal to him that they are his children. Confused, Wolverine states that he never had kids to which the Hydra scientist would explain that when S.H.I.E.L.D raided the Hydra Weapon X facility in the 1980s, one scientist escaped with Wolverine's blood sample. For many years they would attempt to clone Wolverine and in the 1990s it would prove successful resulting in the birth of X-22 and X-23 through surrogate mothers.

The Hydra scientist would also reveal their birth name to him and that Hydra had been conditioning them for years to believe Wolverine was their father that abandoned them and was an enemy. Jimmy and Laura would hear this and being clones of Wolverine they were enraged and began attacking Hydra agents, release Wolverine and the three would then go on a killing spree while escaping the Hydra facility.

Upon escaping, Wolverine would tell Jimmy and Laura how he never knew of their existence and was sorry they were brought into the world the way they were, never having a choice. But he offered them a place at the Xavier Institute so that they'll never have to feel alone again, Jimmy and Laura would thank Wolverine but decline the invitation believing that they needed to leave and figure things out for themselves to which Wolverine understands and wishes them luck on their travels.

Regenerative Healing Factor: Like his "father", Jimmy possesses accelerated healing powers. His powers first appeared when Jimmy, as a child, threw a tantrum and attacked some Hydra agents with his claws only to be shot down completely. Jimmy would heal from these fatal wounds almost instantly, showing he had Wolverine's ability to heal. This "healing factor" is responsible for his slowed aging, bordering on immortality.

Retractable Claws: He has inherited Wolverine's famous three bone claws per hand. He can form a metallic substance around his claws at will. His claws were not synthetically bonded to vibranium like Wolverine, but covered in metallic substance secreted by his body immediately following the first time he extended his claws. The limits of the durability of his unique claws have yet to be demonstrated.

Superhumanly Acute Senses: Jimmy senses of sight, smell, and hearing are all heightened to some degree of superhuman accuracy. He can see much further and with greater clarity than a normal human, even retaining much of this clarity even in near total darkness. Jimmy's hearing is similarly enhanced, enabling him to detect sounds normal human's cannot and sounds they ordinarily could but at much greater distances. Jimmy sense of smell is able to recognize people and objects by scent, even if they are well hidden. He can track a target by scent, even if the scent has been greatly eroded by time and weather factors, with an extraordinary degree of success.

Disease Immunity: Due to his highly efficient immune system, Jimmy is immune to all Earthly diseases, disorders, and infections. Jimmy's supernatural healing also affords him the virtual immunity to poisons and most drugs.

Superhuman Stamina: X-22's muscles produce considerably less fatigue toxins during physical activity than the muscles of an ordinary human. He can exert himself at peak capacity for about 24 hours before fatigue begins to impair him.

Superhuman Agility: X-22's agility, balance, and bodily coordination are enhanced to levels that are beyond the natural physical limits of even the finest human athlete.

Superhuman Reflexes: X-22's reflexes are enhanced to levels that are beyond the natural physical limits of the finest human athlete. In at least one case he reacts to and slices in half with his claws a bullet fired at his face from nearly point-blank range

Superhuman Durability: He was capable of fighting the Wolverine without sustaining any severe injuries.

Expert Tracker and Hunter: Due to his enhanced sense of smell, Jimmy is a dangerous tracker.

Expert Covert Ops Training: Raised in captivity, due to his extensive training as a top-secret operative, X-22 has been trained to become a living weapon. He is highly trained in the use of long range weapons and explosives, and is an expert in assassination techniques.

Master Martial Artist: He is a master in hand to hand combatant, with intensive training in numerous armed and unarmed martial arts techniques during his time in the facility.

Master Acrobat: He is an Olympic class athlete, gymnast, acrobat and aerialist capable of numerous complex maneuvers and feats.

Multilingual: Jimmy can speak fluent English, German, French, and Japanese. He might be able to speak other languages.

Because of his healing factor, X-22 can push his muscles, joints, and ligaments to levels beyond the natural limits of a man of his height, weight, and build without sustaining injury. Unlike Wolverine, his skeleton isn't laced with Vibranium. X-22 can coat any parts of his skeleton with an unknown metallic substance which makes his bones stronger than they already are. While his skeleton, much like his musculature, can withstand greater pressures than a normal human skeleton, he can only withstand so much weight and pressure without sustaining fractures. While not superhuman, he is as physically strong as an ordinary human can be and can lift about 850 lbs.

Retrieved from "https://marvelcomicsfanon.fandom.com/wiki/James_Howlett_(James_Hudson)_(Earth-1111)?oldid=200145"
Community content is available under CC-BY-SA unless otherwise noted.