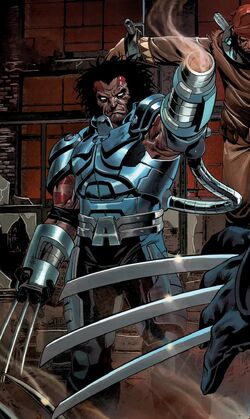 I'm the best there is at what I do. And what I do... is follow orders.

James Howlett officially became the Wolverine after suffering months of experimentation by the rogue government division Weapon X. His skeleton was coated in Adamantium and his memory wiped. After going berserk and killing everyone in the lab, Wolverine escaped.

On the run, he was eventually found by the X-Men, led by Magneto. The team gave him a home, and the telepath, Jean Grey, reached out to him and tried to piece his memories back together. Over time, the two of them became intimate.

Wolverine then went on to fight with the X-Men against the forces of Apocalypse for a short time. It wouldn't be long until he was captured and experimented on once more, this time by Mister Sinister. Sinister did more than just erase his memory. He twisted it and perverted it to make him despise the X-Men, and programmed his only desire to be to serve Apocalypse, and kill those who would oppose him.

Retrieved from "https://marvelcomicsfanon.fandom.com/wiki/James_Howlett_(Earth-9999)?oldid=245217"
Community content is available under CC-BY-SA unless otherwise noted.