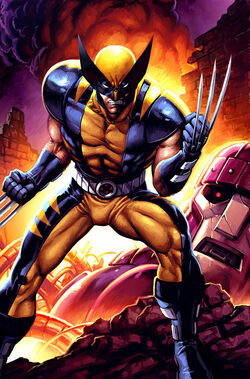 Wolverine was born James Derrick Howlett in Cold Lake, Alberta, Canada, the only child of Thomas Logan and Elizabeth Howlett through an affair. After his biological father refused to acknowledge the young mutant despite his mother begging him to take responsibility in raising him, her husband John Howlett, Sr. found out about the affair and decided to raise James and accept Elizabeth's transgressions, and he soon fell in love with him, considering him his own son. Throughout his youth, James was tall, frail and got sick easily, resulting in frequent trips to hospitals. However, James managed to overcome his illnesses and started to grow healthy, much to Elizabeth and John's delight.

Just as James was getting close to his mother and stepfather, Thomas showed up out of the blue and begged Elizabeth to come back to him. James felt a chill through his spine in how dark the man was and he didn't want his mother to get hurt. When Elizabeth refused and informed him that she was happy with her husband and child, Thomas was ready to retaliate, but James got in front of him, telling him not to hurt her. Thomas looked at him angrily, but when John got into the scuffle, Thomas decided to back away. James had never been scared in his life, only to have his mother saying that everything will be okay. But the nightmare was just the beginning. As James continued to grow up, he was told by his mother that he was going to be a big brother, as she was pregnant.

James felt happy that he was going to have a younger sibling, but the joy was abruptly paused when Thomas showed up at the door once more and demands that Elizabeth leave John and come back to him. John told James to go to the kitchen and let him and his mother handle Thomas. As he followed what John said to him, James heard screaming and yelling between the three until suddenly, loud popping sounds rang through the air. Rushing back into the living room quickly, he saw both his mother and father on the floor in a pool of blood, realizing that Thomas pulled out a gun and shot them both. John died instantly, and his mother dies soon after telling James she loved him.

Horrified of what Thomas had done to them, James let out a yell of pain and anger, triggering his mutation -- a pair of bone claws that extended from the back of his hands. He attacked Thomas, critically injuring him right before the police showed up and took him to the hospital before arresting and charging him for murder.

After the tragic incident, James decided to name himself 'Logan' and leave the province of Alberta, ending up in British Columbia, in a town called Lion's Bay, where he met a First Nations man named Jack Greystar, also known as the "Wolf Man" due to his bonding with wolves. He took Logan in after finding him alone and noticed his new mutant powers, for Jack himself was a mutant. He began to homeschool Logan and train him in the use of his new abilities since Jack could also construct weapons from his bones. They hunted for food and even sparred to enhance his strength, stamina, and agility, and it even made his claws stronger, thus Greystar gave him the nickname 'Wolverine'.

As Logan got older, new powers began to surface, such as regenerative healing, superhuman speed, and enhanced hearing/smell, not to mention having enhanced strength through his X-Gene. He thanked Greystar for everything he had done for him and departed to start on his own, the past of his childhood remaining behind him, even though he misses his mother and stepfather deeply. Getting his passport accepted, he traveled from British Columbia to New York City, where he was encountered by Professor Charles Xavier, who witnessed him fighting a group of gangsters, killing them with his claws, and decided to offer him involved in a project he was forming.

Reluctantly, Logan agreed and was escorted to a secret laboratory located in a mansion, where he goes under an experiment that covered his claws and skeleton in a metal alloy called Adamantium, which made his bones unbreakable, it even made his regenerative healing stronger and permanently decelerated his aging. After his experiment, Logan became part of the X-Men at the same time Xavier founded the Xavier School for the Gifted Youngsters. Logan remained on the team for years, protecting both humans and mutants from any harm. But soon, scandals within the X-Men occurred, as well as increased tension between the members, and Logan was the first one to leave the team, not wanting to be part of the altercations. After the disbandment of the X-Men, Logan put the hero business behind him and lived a peaceful life, opening up a car shop and even coming out as bisexual, having relationships with women and men, none of which lasted too long.

In the present day, Logan was reunited with Professor X and was informed that he was forming the New X-Men; a new team of mutants. He reluctantly agreed to join to mentor the new heroes and he immediately became close to the team and rekindled his friendship with Cyclops, Jean Grey, and Storm after the messy split of the original team. His way of teaching the New X-Men wasn't as ideal, according to Professor X and Cyclops, but Logan isn't a stranger in having fun and often enjoys special occasions with the new mutants such as going to arcades and even hanging out at the mall. Some mutants thought it was weird for Logan, but he didn't care.

Along the way, Logan meets a human/Atlantean-hybrid named Poseidon, who had left Atlantis after it was attacked and was in search for his birth family. Logan became highly smitten over the non-mutant hero but the latter was currently in a relationship with Geostrike, who didn't like him following their meeting. But that didn't stop Logan from pursuing him, fighting alongside him against Magneto and the Brotherhood of Evil Mutants as well as other supervillains.

However, when Geostrike was killed by the US Army, Logan was the first person to go and comfort Poseidon. Despite their interaction starting off rocky, he and Poseidon eventually started to get close with one another, helping the latter move on from Geostrike's death and become happy much to the other teammates' and Professor X's delight (technically, Professor X talked Poseidon in letting Logan into his heart). After finally letting Poseidon come to terms of his loss, Logan confesses to the Atlantean that he had fallen in love with him, the latter accepting them after how much Logan has done for him and the two share a romantic kiss, making their relationship official.

Enhanced Mutant Physiology: Logan is a mutant who had been given an Adamantium skeleton through a procedure by Professor X, enhancing his healing and decelerating his aging permanently.

Retractable Bone Claws: Logan's main mutant ability is his six retractable foot-long bone claws, three of them within each arm that are housed beneath the skin and muscle. Logan can release these claws, which are slightly curved, between the knuckles of each hand and they were naturally sharp before they were infused with Adamantium, making them stronger than their natural structure, and they can penetrate through any material.

Superhumanly Acute Senses: Logan enhanced senses are combined with a separate mutant ability and his healing factor. His most improved senses are his smell and his hearing, making Logan function at night as much as the daytime.

Retrieved from "https://marvelcomicsfanon.fandom.com/wiki/James_Howlett_(Earth-7090)?oldid=269234"
Community content is available under CC-BY-SA unless otherwise noted.