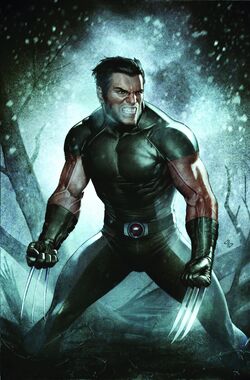 Black
Unusual Features
Animal-like canine teeth, two sets of three, foot-long retractable bone claws stored in both his forearm covered in adamantium, mutton chop sideburns, unique hairstyle, hirsute physique, and scar on the right of his face which extends from the cheek to the forehead and passes through the eye.
Status
Citizenship

Doesn't matter how many we take out... As long as Hydra doesn't get what we came for here...

A long-lived mutant with the rage of a beast and the soul of a noble warrior, the once mysterious past of James "Logan" Howlett was shrouded with blood, war and betrayal. As a unique mutant, Logan possesses an accelerated healing factor, keenly enhanced senses and bone claws in each hand (along with his skeleton) that are coated in the strongest metal on Earth, adamantium, Wolverine became the ultimate living weapon. After joining Professor Charles Xavier's X-Men, Wolverine has been using his mutant powers to fight for the peaceful coexistence of mutants and humans most of his later life.

Before the Invasion, Wolverine seemed to have the same history with his Earth-61615 counterpart, up until the diabolical Asgardian God of Mischief Loki was able to successfully to fool the Avengers and the rest of Earth's mightiest heroes like him, during the significant Battle of New York into fighting his mirage or illusion, while the villain continues to his to spread the chaos caused by his single-minded and bloodthirsty army coming through the wormhole created by the Tesseract. As a devastating consequence to his effective strategy, the invasion of the timeline itself was prolonged for more than a few weeks, longer than it was supposed to be.

Seeing as the situation have gotten even worse than before, the Web-Slinger and the rest of heroes within New York have no other choice but to help the citizens of every city in the country as they continue defending them from the incoming attacks. During the whole week of the massive Chitauran fleet's assault on North America, Wolverine and the rest of the X-Men was one of the heroic street vigilantes who risked their very lives in helping the people of Queens and Manhattan in evacuating them into safety from the incoming arrivals of more extraterrestrial ships, throughout the wide city of New York.

Only a few days since the last incident of the Chitauri Conflict, Logan was eventually recruited by the legendary Captain America into officially aiding him and the rest of the team to bring down the re-emerging legacy of the Nazi organization Hydra, having their existence secretly revealed as a parasite that grew inside of S.H.I.E.L.D.'s community since the Operation Paperclip, thanks to the posthumous efforts given by Ultron, and with it, they were also tasked and were obligated to take the terrorists down and find out more truth behind its survival within only two days as they possibly could, before all of it's deepest secrets, along with S.H.I.E.L.D.'s clandestine schemes and projects, would be dragged as well, and would be also exposed to the entire world.

In Logan's first response, the mutant seemed uninterested with Rogers' agenda to foil the emergence of Hydra, believing that he wouldn't want to be dragged down if the so-called "worse case scenario" happens to him and the team. However, when Rogers unexpectedly revealed to Logan that Hydra was actually holding a mysterious program involving the upgrading of his mutant specimen and powers with several since he escaped Alkali Lake.

Along with it, Rogers found out that one of the test subjects from Alkali Genetics, a dismantled organization that was a former associate of Hydra, was responsible for the creation of several failed clones, except for the one former subject who was still claiming to be the daughter of Wolverine. Truly intrigued and mesmerized by this, Logan finally came to Rogers' aid in preventing the rise of Hydra, desperately wanting to find out this recent discovery himself about having a "daughter," despite continuously doubting that the latter could be true. During the days-long assault against Hydra, Logan and Avengers fought the forces of Hydra in every base across many different parts of the world only using Ultron's leaked files of the organization and assistance from S.H.I.E.L.D.'s technology and equipment. Despite their victory, however, Logan was able to find no other traces of her inside the abandoned Alkali laboratory in which the creation of Wolverine clones, especially his alleged daughter (revealing to be code-named as "X-23"), had taken place before.

Extremely disappointed, Logan left and returned back to the X-Mansion, feeling like he came to risk helping out the Earth's Mightiest Heroes only to find out nothing about what he was actually looking for. Although little did Logan know that his lost daughter was now in her early adolescence, already living her life alone somewhere in the city of Pennsylvania, before finally discovering the existence Xavier's School for Gifted Youngsters when she found an educational brochure about it. While most tales would turn out, fate went differently as X-23 would later be found and raised by Magneto and his Brotherhood of Mutants after they too, have discovered the whereabouts of the young girl, even before Logan and the X-Men could have taken her in.