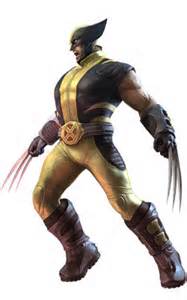 Black
Unusual Features
Animal-like canine teeth, two sets of three, foot-long retractable bone claws stored in his forearm, mutton chop sideburns, unique hairstyle, hirsute physique, and scar on the right of his face which extends from the cheek to the forehead and passes through the eye.
Status
Citizenship

Little is detailed about Logan's life before the great battle against Dr. Doom, however it can be assumed to follow much of the same path as his mainstream counterpart shortly after the Decimation of the Earth's mutant population.

Wolverine, along with Thor, Captain America and Spider-Man, was one of the first heroes to respond to Nick Fury's call to defend the UNN Alpha from the attack of the Masters of Evil. From then on, he remained as a valuable asset for the team.

After the Wrecking Crew's attack in NYC's subway system (which happened months after the Civil War), a meeting had taken place in Washington D.C. This was over the superheroes' limitations under the Superhuman Registration Act. Wolverine, Spider-Man, Hulk, and Deadpool were sent in case of supervillain attacks. Shock of shocks: the meeting was attacked by a supervillain. The attacker was someone claiming to be Blizzard. However he was then attacked himself by Taskmaster of all superhumans. One confusing battle later, "Blizzard" attempted to take the President via a teleporter implanted in his armor. However he is shot down by Taskmaster.

Taskmaster explained that the Blizzard they fought was really a Skrull. He parts off to find and kill more of them in the city. They squad of heroes are contacted by S.H.I.E.L.D., one of their platoons is being attacked. While making their way downtown, they are suddenly attacked by Mac Gargan, the new Venom. The villain wanted revenge on the U.S. government for inadvertently creating the Fold; claiming that formally infected supervillains have gone into seclusion, others even committing suicide. Venom is, of course, defeated.

After the Ultimate Alliance becomes a separate faction: Storm goes missing when investigating the redirection of S.H.I.E.L.D. transports, so a recovery team (Wolverine included) is sent. Logan, Spider-Man, the Sandman, and Daredevil infiltrate the facility to find the Living Laser. He says the Skrulls have set up base in the building, and have been taking mutants prisoner. The five superhumans fight Skrull versions of Quicksilver (who is crushed to death by falling debris from the fight) & Sunfire (who escapes), before confronting a Storm Skrull. After accidentally killing said Skrull by sending her into a electrical generator; the 5 free the real Storm, Quicksilver, and Sunfire before escaping the facility.

Retrieved from "https://marvelcomicsfanon.fandom.com/wiki/James_Howlett_(Earth-6109.2)?oldid=255434"
Community content is available under CC-BY-SA unless otherwise noted.