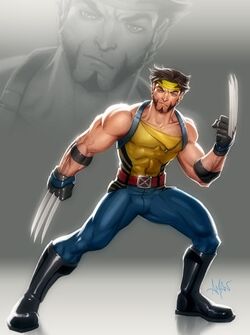 I'm just a weapon to everyone but you, 'Ro. Thanks for accepting me for who I am, whoever that is.

James Howlett has an extremely convoluted life. He was raised by both of his parents in the late 1800s, and he was in a very poor family. He constantly was forced to steal food, and when his powers developed, this made it much easier. Soon, though, in stealing some sausages, he was shot by the store-owner. He stumbled home, and soon completely healed. His parents considered it a blessing, and forbid him from getting more food. He told him he was now more capable, but after an argument, he ran off. He was soon picked up by an Indian tribe, who taught him how to survive in the wild, and also how to control his powers. He considered them his only real family. He was very happy with them, because they protected AND respected him. He vowed he'd stay with them forever, but when all but 1 tribe member was murdered, his claws forced their way, and he fled the area at the request of the leader, Forge.

Soon after, he was discovered by the mutant Mystique, who had just entered the area. She helped take care of him, and he grew to admire her. Soon they became closer than caretaker and the taken-care-of, and they began a relationship. Not long after, Mystique started causing trouble and tried to convince James to join her. Rather than enter crime, he refused, and ran into the forest. He soon realized he'd had 3 groups of caretakers, and none of them lasted. He realized it was because he ran, and he considered himself a coward and tried to kill himself by sticking his claws through his skull. While he was unable to kill himself, he did succeed in wiping out his memory. Noticing his claws, but knowing little of them or himself, he spent his time setting up a whittling shop using the new name of "Logan." His statues were highly prized in his small New York town.

Soon enough, a well-dressed man entered his shop and introduced himself as Erik. Not seeing many fancy people in his shop, he was naturally curious. He was especially surprised when the man knew his name. They went for a walk in the woods, and soon the man tore off his fancy clothes, revealing himself in a stylish black-and grey costume. He called himself Magneto, telling him he was a mutant, and informing Logan that he was also a mutant. He asked him if he wanted to make a great difference in the world, and he agreed, joining the X-Men as Wolverine to save the originals. Slowly, his memories began returning, but when Cerebro and Magneto bonded Adamantium to his bones, he lost them yet again. As a member of the X-Men, he is currently dating Storm.

Healing Factor: Wolverine's primary power is his healing factor, allowing him to heal most injuries that would instantly kill humans (such as being at ground zero of an explosion) in an hour at most. This also makes him immune to vampiric and werewolf infection. He is virtually immune to disease, and this also suppresses traumatic memories. This keeps him virtually immune to drugs and toxins. Once, after his arm was cut off, Wolverine showed the ability to regrow it, claws and all.

Super Senses: Wolverine can track people by scent or detect lies by sweat amounts, and can hear a teardrop hit the floor in another room, or hear a scream a mile away. He can see for almost a mile, and has near-night vision.

Super Strength: Wolverine can lift up to 8 adult men with one arm, and snap steel chains. He is theorized to lift up to 3 tons.

Super Stamina: Wolverine's body does not produce fatigue toxins, allowing him to fight for days, hold his breath for 10 minutes, and survive without sustenance for short periods of time.

Slowed Aging: Wolverine has seemingly lived for at least 100 years, but appears to be 30 years old. This is due to his healing factor slowing the aging process.

Animal Communication: Wolverine can communicate with animals on a basic level, sensing their emotions and informing them of his actions.

Expert Combatant: James is well-versed in armed and unarmed combat.

Weapons Master: James has used many different weapons in his life, and can handle all with expert precision.

Retrieved from "https://marvelcomicsfanon.fandom.com/wiki/James_Howlett_(Earth-5)?oldid=255433"
Community content is available under CC-BY-SA unless otherwise noted.