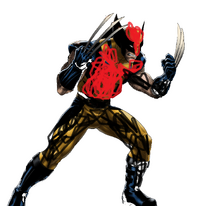 I am Wolverine, Lord Of Hell, cease before me

James was created by Mephisto to be his successor, complete with fake memories of being a mutant, fighting in major world conflicts, and knowing Captain America and Professor X, joining both the Avengers and X-Men as a member. James helped his friends, and came out as bisexual to his friends one day and ended up falling in love with their longtime enemy, the Trapster. His creator, Mephisto, was hugely homophobic and wasn't okay with the relationship.

James was one of the few survivors of Midas' attack, later joining a rebellion led by Captain America, they fought the Ruler Regard and mostly won. James went back to earth after the fight and discovered his true heritage.

James then killed his creator and stole his powers, becoming Lord Of Hell in the process. Then he formed the Hell Masters a team consisting of James, his now-husband, the Trapster, and longtime enemies, The Ancient Apocalypse (or Apocalypse for short), Galactus and Mystique; they were intent on ruling the universe.

Retrieved from "https://marvelcomicsfanon.fandom.com/wiki/James_Howlett_(Earth-37U)?oldid=262161"
Community content is available under CC-BY-SA unless otherwise noted.