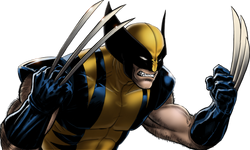 Born in Canada sometime in the early 19th century, James Howlett's mutant powers first manifested in 1845 during a moment of wild rage, after witnessing the death of his father at the hands of Thomas Logan. Grief-stricken, James impaled Thomas with his newly sprung bone claws; in his last moments, Thomas revealed that he was James' biological father.

Fleeing with his half-brother Victor, the two spent the next several decades operating as soldiers. They fought for the Union in the American Civil War, and with the Allied Forces in both World War I and World War II alongside Captain America and Bucky Barnes.

In 1945, James was held in a Imperial Japan POW camp in Nagasaki, confined to a hole in the ground covered by a heavy metal door. On the morning of August 9, the United States Air Force dropped an atomic bomb on Nagasaki; the officers of the camp released the Allied POWs from their cells and fled. While the commanders of the camp committed seppuku, one officer took pity on Howlett, and unsealed his holding cell. Realizing they could not outrun the destructive power of the bomb, James had the soldier hide in the underground cell, and shielded him from the bombing with the steel door. After Logan's recovery, the pair escaped from the pit, and the commander allowed James to escape.

After the war ended, Logan sought redemption in Jasmine Falls, Japan, and he studied with Bando Saburo, in order to learn how to be a man and leave his warrior nature behind. Finally at peace since Silver Fox's supposed death, Logan met and fell in love with a local woman, named Itsu Akihiro and they married and conceived a child together, unknown to Logan.

In 1946, while Logan was proving himself worthy of being a father in combat, the demon sword-smith, Muramasa, created an explosion that caused Logan to accidentally stab a villager with his claws. Logan was banned from the village, but wanted to say good-bye to Itsu. Returning to their self-built home, Logan found Itsu murdered, by Bucky Barnes, now the brainwashed Winter Soldier. Although Barnes ostensibly served the USSR, he was acting under Romulus' orders. Believing their child to be dead, Logan mistakenly blamed Muramasa, who captured and tortured him. When Muramasa's underlings prepared to dispose of Logan, Romulus, or maybe his operative, killed them. Unknown to Logan, Romulus took the child from Itsu's womb, and he was safely born and adopted by a Japanese couple. This child was named Akihiro, but he eventually took the name "Daken", which means "Mongrel". Nine years later Daken fell under the influence of Romulus, and he was told lies that his father despised him and abandoned him, filling Daken with hatred.

Approached by the X-Men

In 1962, Logan was among the small number of mutants Charles Xavier and Erik Lehnsherr detected with the first use of Cerebro. Looking to recruit Howlett to a team meant counter the villainous Hellfire Club, the two tracked Howlett to a bar. Before having a chance to explain their offer, Howlett rudely dismissed them both by saying "Go f**k yourself", prompting them to leave. Howlett briefly looked back before ordering another drink.

Sometime later, both James and Victor fought for the American military during the Vietnam War, until Victor assaulted and killed an officer who tried to stop him from raping a South Vietnamese woman. Surrounded by soldiers with weapons drawn, James rushed to Victor's side, claws out. They were soon put before a firing squad for their insubordination.

After surviving the firing squad, they were recruited by William Stryker to join the black ops group Team X, consisting of Logan, Stryker, Victor, teleporter John Wraith, nigh-invincible Fred Dukes, marksman David North, often referred to Agent Zero, electricity manipulator Chris Bradley and swordsman Wade Wilson. During a mission in Africa, James left the team after realizing how willing the other members were to kill innocent people to achieve their goals, especially Victor, who had developed something of a blood lust.

He returned to Canada, eventually settling down into a quiet life as a lumberjack with a school-teacher named Kayla Silverfox. James - now going by the name of his real father, Logan - was lured back to Stryker after the apparently rogue Victor killed Kayla. Tracking Victor to a local bar the two fought- with Victor savagely beating James and snapping one set of his claws.

This prompted him to accept Stryker's offer to bond his skeleton with Adamantium in order to give him the strength to kill Victor. He asked for dog tags that read 'Wolverine' -- from a tale Kayla had told him. He fled when he learned that Stryker intended to erase his memories and use his DNA as part of another experiment.

Escaping the labs and eliminating the first wave of pursuers - along with his former teammate, Agent Zero - Wolverine tracked down teammates John Wraith and Fred Dukes, and learned of a facility where Stryker kept mutants prisoner. In order to find the facility which was located on Three Mile Island he needed the aid of Remy LeBeau - a mutant known as Gambit who was the only mutant alive to escape it. While searching for him in Las Vegas, Logan came across Victor and fought him a second time, this time defeating Victor. Enraged, he was about to deliver the killing blow when Gambit interrupted the fight. Victor saw an opportunity and fled the scene.

Upon arriving at the Island, Wolverine was horrified to learn that Kayla had faked her death and had actually been an agent of Stryker's all along. Logan was spurred back into action when he learned that she did genuinely love him. Logan went berserk and attacked Victor but chose to spare his life. Stryker's mutant prisoners escaped, including Kayla's sister Emma and Scott Summers. Wolverine confronted the newly-activated 'Weapon XI', his old teammate Wade Wilson, and defeated him with the aid of Victor, who vowed that only he would get to kill his brother.

Before Wolverine could leave with Kayla, however, Stryker shot him in the head with adamantium bullets, subsequently departing after Kayla ordered him to leave using her power of persuasion. When Wolverine regained consciousness, his injuries had healed but the damage to his brain had seemingly permanently erased his memories. As police teams and emergency clean up crews surrounded the destroyed island Wolverine departed with no recollection of his past.

What they did to me, what I am, can't be undone.

While living as a hermit in the Yukon, after a bar fight Logan was greeted by a young mutant named Yukio, who had traveled from Japan to bring Logan back to Tokyo as a dying wish of Yashida, the Imperial Japanese officer whose life Logan saved in 1945. This event made him remember his whole past.

In Japan, Logan came face to face with the Hulk, engaging in a fight. He is then captured by Viper together with Wade and Hulk.

He also faced Silver Samurai, a member of the Japanese Branch of The Hand, clan Howlett briefly joined.

Eventually, he went back to Canada, where he was found by the Scarlet Witch and Quicksilver and became an X-Men.

Regenerative Healing Factor: Wolverine's primary mutant ability is the "mutant healing factor". This allows him to recover from virtually any wound faster and more extensively than a normal human being. He can regenerate from most wounds in a matter of seconds. His healing powers also grant him immunity to all earthly diseases/illnesses and most effects of alcohol, drugs, and toxins.

Superhuman Senses: Wolverine possesses superhumanly acute senses that are comparable to those of certain animals. He can see at far greater distances, with perfect clarity, than an ordinary human. He retains this same level of clarity even in near total darkness. His hearing is enhanced in a similar manner, allowing him to detect sounds ordinary humans can't or to hear at much greater distances. He is able to recognize people and objects by scent, even if they are well hidden. He can track a target by scent, even if the scent has been greatly eroded by time and weather factors, with an extraordinary degree of success. Wolverine can also use his keen sense of smell to detect lies due to chemical changes within a person's scent. These senses stem from, at least partially, his constant cellular regeneration, as are his enhanced physical capabilities.

Superhuman Speed: Is able to run faster than 30 mph.

Insulated Weather Adaptation: Wolverine's body is highly resistant to certain elemental extremes, particularly cold, to the extent that he can sleep nude in subarctic conditions with no apparent injury.

Adamantium Claws: Wolverine possesses 3 adamantium claws harnessed in each forearm, which come out through the skin between his knuckles. His flesh bleeds every time he "pops" his claws but his healing factor quickly stops it. The claws are able to cut through every material except adamantium itself.

Expert Combatant: Due to his advanced age and experiences in various wars, Wolverine is well-versed in unarmed and armed combat and self-defense.

Weapons Proficiency: Wolverine is proficient in handling any firearms thanks to his war experiences.

Decapitation: If Wolverine's head was to be decapitated, he won't be able to regenerate/heal himself and thus, killing him.

Equipment: None known.
Transportation: Motorcycle
Weapons: Adamantium-Laced Skeleton: Thanks to his unique regenerative abilities, Wolverine was able to survive the bonding of the indestructible metal alloy to his skeleton and claws. This virtually makes his bones unbreakable and also makes him able to cut through any substance or material with his claws (except adamantium). It also takes away the limits put forth by a normal skeleton, allowing him to lift more than a normal person and kick/punch with more effectiveness. And because it is believed that Wolverine can only be killed by being decapitated, he is now thought to be nearly unkillable, although if someone or something was to remove the adamantium, Wolverine could possibly be killed. His skeleton can also be damaged by adamantium at a high velocity, though this is not nearly enough to kill him. It is not easy to do this, however-- he would have to be shot at close range by (preferably) an adamantium bullet to be damaged.

Retrieved from "https://marvelcomicsfanon.fandom.com/wiki/James_Howlett_(Earth-1010)?oldid=129878"
Community content is available under CC-BY-SA unless otherwise noted.