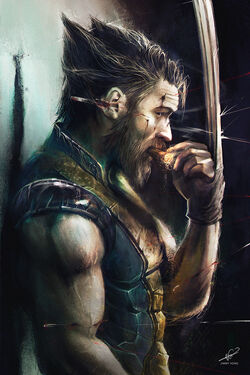 One way or another, the world's goin' to hell. We can fight it all we want, but we won't change a damn thing.

James Howlett was born in the late 1800's to a wealthy Canadian land owner. He was good friends with a peasant boy named Victor, whom his father vehemently disapproved of. Eventually, James discovers that Victor's father, James Logan, was actually his Uncle and that he and Victor were cousins, both with mutant powers. These revelations in combination led to a violent confrontation in which their parents killed each other, leading the townspeople to blame James and Victor for being "freaks".

They proceeded to go on the run and sneak past the American border so that they could build new lives working in construction and private security. Eventually, when World War 1 broke out, they each enlisted and were somewhat thankful for the opportunity to use their powers in a real world situation. They eventually discovered that their mutations gave them both healing factors, and made it practically impossible for either of them to die.

James would later change his name to Logan to further distance himself from his past, and during World War 2, ended up getting captured by Hydra. However, he and hundreds of other soldiers were freed by Captain America. Logan then decided to join his team of Howling Commandos, despite Victor not thinking it was a good idea. However, Logan and Captain America became good friends, and he even felt comfortable enough to tell him about his mutation.

Logan was hurt when Captain America was presumed dead near the end of the war, but it was hardly the first time he'd lost a friend. He and Victor later reunited to fight together in the Vietnam War, where the army discovered their mutations and jumped to the conclusion that they were Vietnamese plants and ordered to execution. After the executions failed, they were imprisoned while the army tried to figure out what to do with them.

They were eventually bailed out by a man named William Stryker, who offered them a chance to join a covert black ops team of other mutants of interest.

They agreed and joined Weapon X, and proceeded to go on countless dark missions, including assassination and toppling regimes while William Stryker collected Adamantium from across the world. Eventually, Logan became disillusioned with what they were doing and, after an argument with both Victor, who had taken on the name Sabretooth, and Stryker, he left the team.

Wolverine later journeyed to Japan, where he fell in love with a woman named Itsu. While there, Logan began meditating and tried to achieve inner peace while struggling with the demons from his past. However, his past was dragged back into the present when Itsu was murdered by Sabretooth, who was ordered by Stryker to lure Logan back out into the open.

He was then manipulated into rejoining Weapon X so that they could use him as a test subject to bond Adamantium to his skeleton. He believed that the process would allow him to take revenge on Sabretooth, but after it was finished, they instead wiped his memory and turned him into Weapon X, an assassin they could control. For the next ten years he was continually wiped and used until he started getting memory flashes and escaped, massacring the entire lab as he escaped into the wilderness.

All he had was a dog tag with the name Logan printed on it, and he eventually earned the code name the Wolverine as he was continually hired to do dirty jobs until he eventually settled himself into a career as a cage fighter just north of the Canadian border.

However, that only kept him satisfied for so long. One day he met a young girl named Marian, who confided in him that she had powers as well. Intrigued by discovering he wasn't alone, Logan reluctantly agreed to help her, and the two of them began a trek to find answers. However, they were attacked by Sabretooth, who had since left Weapon X to join Magneto's Brotherhood of Mutants, who was accompanied by Mystique and Sunfire. Wolverine had no memory of Sabretooth, but felt he was vaguely familiar. In the ensuing conflict, the Brotherhood began to gain the upper hand until the X-Force arrived to save them. Cyclops and Storm managed to defeat the Brotherhood and escape with Logan and Marian.

They were taken to the Xavier Institute for Higher Learning, where they were introduced to Professor Charles Xavier, the headmaster of the school and founder of the X-Force. Wolverine only agreed to stay to look after Marian, who he'd grown fond of, and because Professor Xavier offered to help him uncover his memories. He was then even more convinced after meeting Jean Grey, who he instantly became enamored with, despite the fact that she was dating Cyclops.