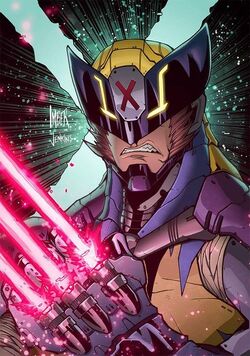 I never thought I'd say this, but damn I miss my Adamantium skeleton.

Wolverine's mutation has long been a source of interest by various organizations that have tried to turn him into a weapon. Following Adamantium implants and several mind wipes, he eventually found his family among the X-Men.

Wolverine fought in the battle against Thanos, only for him to use the Reality Stone to remove all traces of Adamantium from his skeleton. He most likely would have died from the ensuing wounds he received, but luckily for him he was not one of the mutants affected by the depowering.

He would go on to join the Resistance, where Tony Stark outfitted him with a suit of armor capable of emitting laser claws even more powerful than his old Adamantium ones.

Retrieved from "https://marvelcomicsfanon.fandom.com/wiki/James_Howlett_(Dimension_0)?oldid=263465"
Community content is available under CC-BY-SA unless otherwise noted.