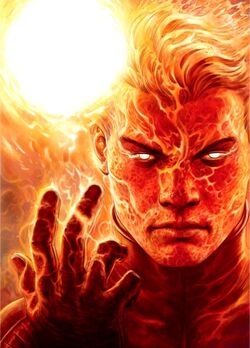 Earth-61616
Base Of Operations
The Resistance's Base, New York City (formerly)
Characteristics
Gender

I'm Jim Hammond and I believe that I became next the Human Torch for a reason. So I could send you @$$holes in the flames of justice!!!

James "Jim" Hammond was born to scientist Phineas Horton and his late wife Lanette Raye. His first name was named after the son that he never had "Jim" with his ex-fiancee, years before Phineas eventually met Lanette. His surname was then named after the specialized synthetic android his father had previously designed and started, "The Hammond Program," (also was secretly known as the Synthetic Man Project) which sadly failed, after some slight complications had occurred years earlier after battling Hydra operatives at one time, during the last days of World War II.

Prior to the events that got several other heroes and villains killed fighting for Earth's freedom against the megalomaniacal machines, Jim was taken into safety alongside the million other survivors into a secret underground mega-city the size of New York City (also located below and inside New York), developed by Tony Stark in case of apocalyptic emergencies to avoid mass hysteria and panic. Jim became part of the program known as S.H.I.E.L.D. Trainees Program, in which young enhanced individuals were trained by their superiors in order to defend themselves from upcoming threats, it could be Ultron himself, or something much, much worse.

At one point during the last days of Year 9, Jim's father Phineas, decided to voluntarily work alongside the heroes so they can find a way to try and stop Ultron and his crusade of technological singularity across the entire world. Jim pleads for him to stay but he can't, letting his father enter the war-zone and letting himself get in great danger. Days later, Phineas hasn't returned to the underground city, making Jim and his mother extremely worried that something must've happened to him. Thankfully, Phineas and the rest of his crew manages to make it out alive, returning back into the city one week later. Just as the Invaders entered the underground city, they unknowingly brought something that would jeopardize the entire mission or worse, it could destroy the city itself. It was revealed to be a nano-bomb (equivalent to a 55 Mt nuclear bomb) that was implanted (by Ultron-possessed technology) inside the suit of Phineas clothes he used to wear during the previous mission (while they were back in Ultron's Sanctuary). Jim eventually found the suit in his father's closet and scanned it, finding out that the explosives had sensors, and would immediately detonate in less than five minutes if no one wears it.

Afraid that doing nothing would result the loss of many lives including his parents and the extinction of humanity itself, Jim had to do the noble deed and decided to wear the suit to save everybody else, including his father and mother. He later told his secret to Franklin Richards, and asked for his help if he could disarm or deactivate the explosives in time before the timer goes out by the next day. Jim pleads that Frank shouldn't tell anyone else about this, due to the risk of jeopardizing themselves if everybody finds out, the bomb could suddenly detonate.

Frank unwillingly agreed since he suggested that the superiors should at least know about this but Jim insisted, although he did his very best to try and find a way to disable to explosives inside the entire suit. While searching for a way on disabling the explosives, Franklin at least did find out a way on slowing it down from detonating, and that the explosives' exposure towards cold temperatures. Frank invented another device that would project blasts of ice and cold, but wasn't enough, and the device stopped working. Franklin did found out another way on slowing it down right away, although he was sure that Jim wouldn't have liked it. Jim insisted Franklin to tell him how, revealing that the only way to disarm the explosives is through another Ultron technology-based device, and the nearest one he found was located at Ultron's Sanctuary.

Jim seem to have lose hope at first, although after realizing that this situation would cost lives, including the victory of humanity itself, he had the courage to leave the city and sneak his way into the Sanctuary alone to try and disarm the explosives by himself. Once arriving at the secret passageway leading to the Sanctuary, Jim had to go through some several difficulties and challenges, such as encountering a battalion of Ultron Sentries guarding the location, which he had able to miraculously escape their capture, before he was able to finally get into the entrance of the area.

Upon entering the nearest area next to the entrance, Ultron's facility and laboratory, Jim had seen some things in there he couldn't have ever unseen, such as Ultron's every experimentation on living and organic matter, especially humans and mutants, where he intently and mercilessly make them develop cybernetic enhancements and eventually turn them into a so-called "cyborgs," in order to fully upgrade their capabilities and make them "just like him," according to the words of Ultron, as he explains it through video footage.

Despite getting haunted and traumatized by everything that he saw, James never gave up and still continues searching for the highly-advanced tools inside the laboratory where he might be able to disarm the explosive out of him, slowly, sneakily, and safely. However, just as when he found the tools he needed, he was unexpectedly got caught by Ultron himself, when he was close to disarming the bomb minutes later. As a result, Ultron once again sent out an army of his Sentries to execute Jim and neutralize his plans on disarming the explosive.

Realizing that his plans on fully disarming the bomb would clearly fail, Jim had no other choice but to accept his fate so he can save the lives of his people, not just to save his people, but also to save the rest of mankind itself, and still give them the bright future they still desired to have for the next generations to come. By the second the nano-nuclear bomb hits a minute in its timer, the Sentries already surrounded Jim. As they aimed their plasma cannon at him, Jim uses a screwdriver to jab the explosives, making it detonate immediately, presumably killing Jim and destroying the Sentries and the lab itself in the process.

In the wake of the explosion, half of the Sanctuary was left in ruins, creating a transparent passageway, which would eventually help the Resistance enter Ultron facility, find him, and finally defeat him and stop all of his plans on world eradication, once and for all. Jim's bravery and his courageous act & heroic sacrifice had a major impact throughout the heroic community, inspiring them to finally have the final motivation in order to ultimately stop this decade-long reign of terror.

Despite what everybody had thought, Jim was revealed to have survived, following the events of his noble sacrifice. A year later, during the last days of Year 10, which was the last year of the Ultron Revolution, Jim was somehow found by his father Phineas in the ensuing battle between the heroes of the Resistance and the machines of Ultron's Regime. Having only half of his body and most of his limbs torn apart, Phineas was horrified to see what happened to his son, although his was still thankful to see that he was able to miraculously survive.

Pyrokinesis: Jim after gaining several cybernetic body parts from the Hammond Program and after becoming a mutate after getting exposed to cosmic radiation, possesses the mental ability to control ambient heat energy and the physical ability to envelop his entire body or portions of his body with fiery plasma without harm to himself. (Plasma is a super-heated matter that exists in the atmosphere of stars).

Retrieved from "https://marvelcomicsfanon.fandom.com/wiki/James_Hammond_(Earth-61616)?oldid=256269"
Community content is available under CC-BY-SA unless otherwise noted.