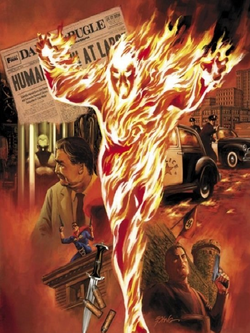 I'm burning alive! Why must everything I touch burst to flame? They didn't want a man, they wanted a machine. They shall have burning man, they shall have a human torch!

The origins of the Human Torch began in 1939, in the lab of Professor Phineas Horton. Years of research in the field of robotics culminated in a human being crafted from synthetic material. However, the cells created to power this android (Horton Cells) would burst into flame with even the slightest exposure to oxygen. After revealing the android to the public, it was deemed a possible menace, and so Horton sought to bury the android in concrete until he could fix this flaw, which he would ultimately never accomplish himself.

Ultimately, the container proved not to be airtight, as enough oxygen leaked in that the Torch could escape. He simply sought to explore his environment, but given the android's flaming nature, he began to cause a public scene. Dubbed the "human torch" by disturbed onlookers, he ultimately jumped into a swimming pool to exhaust his flame.

He was recovered by Anthony Sardo, who took advantage of his childlike view of the world to use him for criminal purposes. Seeing the illegal nature of his acts, the Torch ultimately rebelled, killing Sardo. The Torch returned to his creator, Professor Horton, and was chastised, but Horton was overwhelmed by the power he was face to face with. He recommended that he and the Torch work together to gain fame and fortune. Rejecting this notion as well, the Torch left, setting Horton's residence ablaze.

Seeing that he did not have an active purpose, the Torch presented himself to the NYPD and asked if he could be an officer. Given that he did not have any formal training, nor did he have control over his flame yet, they could not allow him to be a police officer. However, they did utilize him in cases involving superhuman activity. This led him to clash with Martians and the Green Flames.

His most important mission came when he paid a visit to one of Horton's colleagues, who the latter had consulted to help the former after his "rampage." Horton's colleague was named Fred Raymond, and was an expert in the field of asbestos. He had recently discovered a new form of asbestos that was less harmful to humans. Coming to observe the product in the hope that it would grant him control, the Raymond family was attacked by the Asbestos Lady, seeking to kill the Torch to vindicate her brother. Exposure to both kinds of asbestos ultimately did give the Torch control over his flame, and he defeated Asbestos Lady in a long and trying battle, but not before Raymond's wife Nora was burned to death. Despite this tragedy, the NYPD hailed him as a hero, and the Human Torch was inducted into the police force, using the alias "Officer James Hammond."

During this time, Hammond would face the Sub-Mariner for the first of many times, as he attempted to threaten the surface world on the shores of New York City. In their first encounter, Namor would be victorious, though studying his tactics would enable Hammond to take the victory in their future bouts.

It was during this time, also, that Hammond found his relationship with the Raymonds growing tense. Fred Raymond had noticed that his son was running a constant fever, which culminated in him bursting into flames. He had run away and attempted to join a circus, but Raymond entrusted him in Hammond's care, asking to never see either of them again. Understandably shaken, but remaining strong, Tom asked to go adventuring with James. He denied him the opportunity, but after a tough battle with Namor in which he received the help of Captain America, he decided to begin training the young man.

Soon Raymond would adopt the mantle of Kid Kerosene, and would begin aiding the Torch in battles against many strange foes. Kerosene also joined the group known as the Young Allies, a group of super-sidekicks aiding their heroes in the war on crime. It was Toro's involvement in this team that would lead the Torch to meet and work with many of his future allies in the Liberty Legion.

Retrieved from "https://marvelcomicsfanon.fandom.com/wiki/James_Hammond_(Earth-166)?oldid=256268"
Community content is available under CC-BY-SA unless otherwise noted.