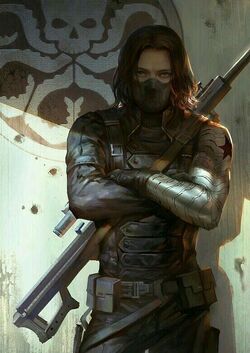 Brown
Unusual Features
His robotic left arm given by the HYDRA at the Project Winter Soldier procedure.
Status
Citizenship

Engaged
Occupation
US Soldier (formerly)
Vigilante (currently)
Mechanic (currently)
Education
College-leveled education
Origin
Origin
Kidnapped by the HYDRA while fighting in World War II, facing hellish procedures in becoming the next Super Soldier and a mindless killing machine but he managed to escape and become a vigilante until he starts fighting alongside the Avengers and falling in love with the Onyx Spider
Place of Birth
Buffalo, New York, USA
Creators

I was about to become HYDRA's mindless puppet but I should really thank them for making me the person I am. With my abilities, I will do what it takes to bring criminals down to their knees.

James Buchanan "Bucky" Barnes was born in Buffalo, New York in the early 20th century where he was put into an orphanage at the age of 4 years old after the death of his parents. He experienced the ups and downs while living in the orphanage until one day he ends up saving a frail young boy from a group of bullies. That young boy happens to be Steve Rogers who would eventually become Captain America. Bucky would protect Steve from any other bullies that tried to torment him and during Christmas, he gave Steve an iridescent marble, telling him to cherish it as a remembrance of their friendship.

Soon after, Steve was adopted by Jaeger Kaufman and Bucky spent the rest of his years in the orphanage, being homeschooled by the caregivers until he turned 18. At the time, he began to become interested in being part of the United States Army, and at the beginning of World War II, Bucky was enlisted in the army, not even knowing that Steve would try to enlist but was rejected as he was sent to Germany to fight the Nazis.

The Birth of the Winter Soldier

During his battle with the Nazis, Bucky was being watched by the HYDRA, their leader Red Skull believing that he was the right person to become part of their project. The soldiers of HYDRA drugs Bucky without any warning and drags him into their laboratory where he was met by Red Skull, telling him that he was the perfect candidate to become their next Super Soldier. HYDRA began to put Bucky through physical and mental trauma, torturing him into hellish training and would severely punish him if he didn't comply with them. They even amputated his left arm and replace it with an enhanced cybernetic arm to make him stronger.

However, as the Winter Soldier at its peak of success, Bucky managed to regain control of himself before becoming fully brainwashed and escape the clutches of HYDRA before Steve Rogers, now known as Captain America showed up in Germany to finish off World War II and save the world by sacrificing himself in crashing the plane into the Atlantic Ocean and freeze into a block of ice. Bucky, now out of HYDRA's sight took a glimpse of himself, remembering the torture they had put him through. He hated it at first, but soon after, he began to accept it and turned to a path of vigilantism, protecting the innocent who doesn't have the ability to defend themselves until he returned to the United States.

Upon his return to America, Bucky shows up in New York City, mainly Brooklyn where he was met with the craze from the citizens of Brooklyn showing their love to the new Spider-Man hero, the Onyx Spider. Interested over the black-and-red clad hero, he takes a glance at the TV and watched the webslinger take on various criminals and superpowered villains. This brought Bucky in remembering the days his best friend, Steve made his debut as Captain America during the events of World War II and it got him interested in meeting the new Spider-Man. He got his chance when he encounters the Onyx Spider fighting the Enforcers with the Shocker being their newest addition. With his newly altered form and his bionic arm, Bucky overthrows the villains but he got far-from-sweet gratitude from the webslinger who removed his mask, revealing to be Miles Morales who at the time was in his senior year in high school. But instead of getting offended by the young hero's chastising, he grew an interest in him.

After their first meeting, Bucky fought along with the Onyx Spider who didn't like the idea of having him help fight the villains whenever he gets himself in situations he can't get himself out of most of the time. But after Miles' friends Riri Williams aka Ironheart and Ganke Lee, who would later become Young Hulk, talked Miles into giving Bucky a chance to teaming up to fight with them, the Winter Soldier began to develop a slow and steady friendship with Miles who at first wasn't fond of it, but the latter eventually started to get comfortable with his company and Bucky would open up to him about his past life after trying to keep it hidden for so long. He soon starts to become attracted to Miles but chose to keep it mellow due to him just getting to know the rising webslinger.

Winter Soldier Project: The Winter Soldier project was created by Red Skull of HYDRA who had discovered Jaeger Kaufman and his team create their first Super Soldier: Captain America. They kidnapped Bucky while he was fighting the Nazis and put him through extreme procedures that it nearly scarred him physically and mentally. This also involved the Infinity Formula which was injected within him to become more agile, quick, and strong.
Bionic Arm:

Retrieved from "https://marvelcomicsfanon.fandom.com/wiki/James_Buchanan_Barnes_(Earth-7090)?oldid=272219"
Community content is available under CC-BY-SA unless otherwise noted.