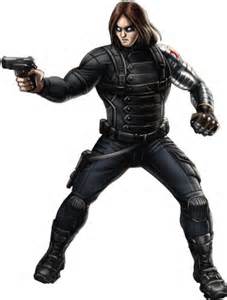 Earth-6109.2
Base Of Operations
The Vault
Characteristics
Gender

Little is known about the Winter Soldier's life before the Masters of Evil attack on the Strategic Hazard Intervention Espionage Logistics Directorate (Earth-6109.2) Alpha Helicarrier. It can be assumed to be similar to his mainstream counterpart.

Having known Winter Soldier from their time working together in World War II (then known as Bucky), Captain America said that he wouldn't fight Winter Soldier because of their work during the War. Even though he said that, Winter Soldier proceeded to fight the Ultimate Alliance, with no success and escaping to finish his mission with Radioactive Man.

After the defeat of the Fold, Winter Soldier decided to reform, becoming a member of S.H.I.E.L.D. He was stationed as warden of the Vault. Months later, the Vault is attacked by a War Machine Skrull; releasing Whirlwind, Klaw, Iron Cross, Crossbones, and Grim Reaper. Winter Soldier meets up with Fantastic Four - who were sent by the Ultimate Alliance to help. When they encounter Klaw, he incapacitates Winter Soldier with his sonic gun.

Two weeks pass (Winter Soldier managed to recover), and a Hammer Industries facility is attacked by who appears to be the Crimson Dynamo. His old mentor Captain America, Winter Soldier, Iron Man, and Whirlwind are sent in to investigate. Upon arrival, the team makes their way to find Dynamo interrogating Justin Hammer on the progress of the updated Dreadnoughts. Hammer says the company finished the prototype, and that it's kept in storage. Dynamo notices the heroes, incapacitates Hammer, and taunts them as he races towards the storage area of the facility. Dynamo beats the team to the Dreadnought, but Iceman arrives with Valentin Shatolov (without his armor). This comes to no surprise that the "Crimson Dynamo" raiding one of Hammer's weapons facilities is in reality, a Skrull. The Skrull activates the Dreadnought, and leaves as he downloads the blueprints for the Dreadnought prototype into his armor. The prototype manages to injure Iceman before it is destroyed. The team finds the Skrull on the roof of the building, and proceeds to attack. Before his defeat, the Skrull manages to send the blueprints to wherever the Skrulls managed to set up shop on Earth (which was what he was doing on the roof). Since the UA destroyed his old one: Shatolov builds an upgraded version Crimson Dynamo armor, and forms a truce with them. Some time afterward - not wanting Stane Industries to go out of business from the Skrull's conquest of Earth, Iron Monger decides to join the Ultimate Alliance (much to Iron Man's discontent).

Retrieved from "https://marvelcomicsfanon.fandom.com/wiki/James_Buchanan_Barnes_(Earth-6109.2)?oldid=123463"
Community content is available under CC-BY-SA unless otherwise noted.