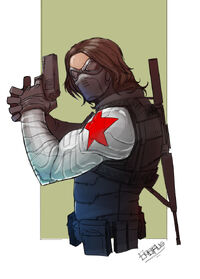 Little is known of his early life except that he was an orphan. At the age of five he met a young Steve Rogers who had just lost his mother. Bucky befriended and comforted Steve and the two would eventually become best friends. Growing up, Bucky would protect Steve from bullies due to his small and frail stature, despite being one year younger than Steve.

At twenty-three, the United States would enter World War II and battle against the Nazis, Bucky would enlist immediately believing it was his duty to his country.

In 1945, Steve learned of Hydra's leader; Johann Schmidt, the Red Skull had built a prototype a-bomb made with ancient Celestial technology and had planned to drop it in Washington D.C. Though too late to stop the bomb's launch, Captain America managed to defeat the Red Skull and with the help of Bucky, get to the bomb moments before its launch. In a successful attempt to stop it in mid-air, Bucky and Steve fell to the sea, with Bucky losing his left arm, and both were presumed deceased. However, Bucky was later discovered by some Hydra soldiers and taken away in a submarine.

When recovered by Hydra, he would be taken back to a disclosed Hydra location, Hydra hoped to find traces of the Super Soldier Serum in Bucky's blood but could not find any, which resulted in Bucky's unconscious body being put into cryostasis.

A decade later, in 1954, he was revived and his missing left arm was outfitted with a cybernetic replacement, as history would pass, Hydra would consistently outfit him with upgrades. Bucky would have no memory of his past, and Hydra would see this as a perfect opportunity for them to mold him into an agent for them. Bucky did have muscle memory from his extensive military training, and was trained even more to be Hydra's perfect assassin. Over the years he would assassinate many enemies of Hydra and earn himself a reputation as the Winter Soldier and as a ghost story, in between missions he would be put in cryostasis to cease his aging.

In 2015, the Winter Soldier would be taken out of stasis to watch out for any potential intruders while some Hydra agents would be transporting an object known as the Cosmic Cube.

While observing the transaction, a man in a star spangled outfit who would strike something in the Winter Soldier that would make him feel strange and a red haired woman would intercept the transaction. Winter Soldier would observe his enemies and study their moves while they were fighting the Hydra agents.

The two would clear the room of Hydra, and the Winter Soldier decided it was time to strike. He would proceed to attack them and knock out the red haired woman, the star spangled man would gain the upper hand and knock his mask off.

Electromagnetic pulse could possibly render bionic arm useless. Although this could be questionable due to the fact his arm is capable of emitting an EMP.