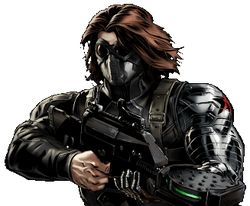 First appearance
WWII
(as Bucky)
S.H.I.E.L.D.ed
(as Mystery Man)
Birds of a Feather
(as Winter Soldier)

Barnes was orphaned at an early age and was living in an orphanage ever since. During a regular day, he noticed a skimpy, weak kid getting beaten up by some bigger bullies. He stepped in and saved the kid, who introduced himself as Steve Rogers and became good friends ever since.

In 1942 during World War II, Rogers was continuously deemed physically unfit to enlist in the U.S. Army and fight the Nazis. At one point, Steve was beaten up once again by a man who disrespected the soldiers in the front lines. After dispatching the bully, the two best friends went on a double date, as it was Barnes' last day before returning to the fight. As the date, the friends visited the Stark Expo hosted by the company's CEO Howard Stark. When Rogers attempted to enlist again, Bucky tried once again to convince his best friend to stop, only to fail. Instead, the two exchanged a brotherly hug and words of encouragement before Barnes departed. Later, when Steve first became Captain America and was selling war bonds, Bucky was on the front lines in Italy, eventually getting cut off and his whole combat unit was taken prisoner by HYDRA.

When Steve discovered there were no plans to rescue the prisoners, he joined Peggy Carter and Howard Stark, flying an undercover mission into HYDRA Territory, resulting in the rescue of the prisoners and Bucky, though both Arnim Zola and the Red Skull escaped the self-destroying facility.

As a Howling Commando

When Cap had to choose a team to wipe HYDRA off the map, Barnes was Rogers' first choice, as well as the others in his company- forming the Howling Commandos. It wasn't long before the team was easily taking down the HYDRA armies and bases, with Bucky's sniping skills providing valuable long-range help.

When it was discovered Arnim Zola was on a vulnerable train, Cap and Bucky zip-lined down to invade the cars hoping to find him. Instead the pair found advanced armored HYDRA troops. While Cap defeated the one in his car fairly easily, Bucky was less fortunate, eventually needing the help of Cap's shield before he could defeat the troop. The downed soldier was not out however, and used it's cosmic cube-enhanced suit to blow Barnes out of the side of the train car. Bucky clung to the side of the extremely fast train, but when Cap went to go rescue him, he lost his grip and plummeted off a cliff to his death - though no body was never recovered. Cap took the death of his best friend hard, and it was a large part in his determination to make both the Red Skull and his army pay.

However, Bucky had survived the fall thanks to Zola's experiments, but his left arm had been heavily damaged. Hydra operatives found him and restored what they could of his body, then under the "Winter Soldier" program, he was brainwashed and given a cybernetic left arm. In later years, he was used to assassinate numerous political leaders, and in espionage circles these killings formed something of a legend around him as the mysterious Winter Soldier. Between missions, he was kept in suspended animation so he wouldn't age.

After Nick Fury discovered that S.H.I.E.L.D. was compromised, Hydra leader Alexander Pierce deployed the Winter Soldier to assassinate Fury. His first attempt failed when Fury used S.H.I.E.L.D. technology to evade him, but his second attempt was more successful despite him being chased off by Steve Rogers who had also survived to the twenty-first century after being frozen for seventy years.

Bucky was later given a new mission to kill Captain America, who had become a fugitive of the Hydra-influenced S.H.I.E.L.D. After Steve and his allies, Black Widow and Falcon, captured S.H.I.E.L.D./Hydra agent Jasper Sitwell, the Winter Soldier attacked Rogers. During the fight, Steve knocked the Winter Soldier's mask off, revealing his true identity, but he did not act reciprocally with Steve. He escaped while Steve still grappling with the revelation of Bucky's survival and returned to his base. Bucky began recalling fragments of memory about Steve, but was brainwashed once more so he could fulfill his task without his emotions interfering.

When Project Insight, Hydra's plan to use S.H.I.E.L.D.'s highly-armed Helicarriers to massacre any possible threat to their new world order, was about to be launched, Captain America and his allies arrived to the Triskelion in order to stop Hydra, and the Winter Soldier was deployed once more to stop them. After two of the three Helicarriers were reprogrammed, Bucky moved to stop Captain America and Falcon at the third. Bucky managed to damage Falcon's wings and drove him off. Then he turned on Steve while Steve tried to make him remember his past. Rogers managed to replace the chip, which in turn caused the helicarriers to target each other, and the assault soon had all three falling from the sky.

The Winter Soldier became trapped under debris cause by the barrage, yet Steve still took the risk to rescue him. As soon as he was free however, he attacked again. Captain America refused to fight against him, and let himself be brutally beaten instead. But before Bucky could deliver the final blow, Steve told him that he would be with him until the end, a promise that Bucky had given Steve decades before after the death of Steven's mother. Conflicted by the feelings this called up within him, Bucky halted his attack. As Steve fell off the vessel into the Potomac River, the Winter Soldier leapt in after him, rescued him, and left him in the side of the river before disappearing.

Some time later, Bucky entered the Captain America exhibit at the Smithsonian Institution and found a section dedicated to himself.

Equipment: None known.
Transportation: Various military vehicles.
Weapons: During World War II, Bucky was supplied with an assortment of firearms, including the M1911 handgun. In later years, as the Winter Soldier, he was equipped with a state-of-the-art arsenal, including various automatic weapons.

Retrieved from "https://marvelcomicsfanon.fandom.com/wiki/James_Buchanan_Barnes_(Earth-1010)?oldid=100107"
Community content is available under CC-BY-SA unless otherwise noted.