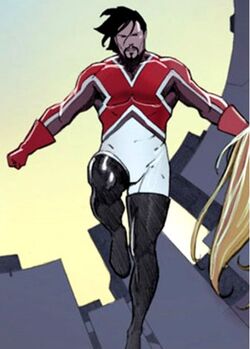 James "Jamie" Braddock, Jr. was a mutant born at the Braddock Manor, his family's ancestral home in the town of Maldon, Essex, England. He is the oldest son of James and Elizabeth Braddock. He grew up with his younger sister Betsy and his younger brother Brian, although he usually felt excluded from the twins, who were very close to each other. Unbeknownst to Jamie and the rest of his family, only his father was aware that he was containing the X-Genes since he was born, though none of his natural powers would ever manifest due to his father's decision of reluctantly preventing the X-Genes from being unlocked after using a vita ray device on him while he was still an newborn infant.

Jamie and his siblings wouldn't even know this surprising revelation until later on before his father's death, since their father believed that it would be for Jamie's own good, even though his young daughter, Betsy, was also a mutant. Growing up, Jamie finished all of his education at Oxford University, to which he graduated with several college degrees. Later on in his early adult life, Jamie helped his father in building the modern incarnation of the European Defense Initiative, as a way of reliving most of their ancestors' legacy who first founded the peace-keeping organization for the sake of protecting the European Union. At some point in time while working for the E.D.I., Jamie had met a fellow E.D.I. operative by the name of Andrew Black, also known by his codename, the Guvnor. The two would eventually get along, to the point where they developed a sexual, and even later, a lasting romantic relationship.

He later participated during the infamous Global Superhuman War, helping the E.D.I. in order to help his allies fight off the forces of Hydra's super-soldier forces within the United Kingdom who joined the cause of the diabolical Movement Alliance. During the late attack on the Braddock Manor, the secret headquarters of the European Defense Initiative, the sleeper Hydra unit led by E.D.I. traitor and Hydra commander Andrew Black had secretly infiltrated the agency base. Much to his surprise, Jamie was shocked that his former lover was revealed to have been a traitor and was only using him to infiltrate the agency.

Jamie, his father and most of the remaining E.D.I. members were stranded inside the last safe compartment within the headquarters, defending themselves while Brian tries to get to them after he and his team had recently taken down a terrorist group in London. However, when Brian's team have suddenly fallen into a trap set by Black, their father had no other choice but to help Jamie reactivate his latent mutant abilities using the vita ray chamber in order to combat and protect themselves from the incoming soldiers. During the process, the treatment was proven to be a success, only for his father to sacrifice himself, by getting himself shot by agent Black, in order to prevent Hydra from intervening with Jamie's treatment by the last second it was closed to being finished.

As a result, a enraged and greatly shocked Jamie finally unleashed his ultimate mutant power, to which he mercilessly beat down the traitor once he was weakened and burning his head with his newfound thermokinetic power, unintentionally killing Black in the process, justifying the deaths of his father, along with many more innocent lives that he sadistically took in the past. Jamie, Brian, and the surviving members of the E.D.I. then heavily mourned their father's death, which had subsequently led the two brothers into fully helping the rest of the remaining E.D.I. forces across the European Union and the Ultimates all over the world one last time to avenge the other people who were responsible for the death of their father, and until the end of the war, they were ultimately victorious against the Movement Alliance.

Although his younger brother barely survived the last countless attacks during the Ultimate War, a currently recovering Brian decided to retire from his career and duty in the meantime, and stay instead with his fiancee Meggan Puceanu, a fellow mutant. Because of this decision, Jamie momentarily took up the mantle of Captain Britain, and quickly became the new substitute leader of the European Defense Initiative's reconstituted Super Soldier Program a week after their father's funeral, as a great act of honoring the memory of his life, after sacrificing himself in order to save Jamie during the nearing end of the Global Superhuman War.

During the official implementation of the global Superhuman Registration Act by the United Nations as a response to the chaotic aftermath of the Ultimate War, Jamie as a director of E.D.I. decided to side and fully agree with the worldwide accords, along with the E.D.I.'s mutual ally American agency S.H.I.E.L.D. under the deputy directorship of Maria Hill and Tony Stark's leadership as the public face of the act itself, for the overall betterment of the European Union's own safety from potential attacks in the future, both international and extraterrestrial alike.

During the brief but devastating conflict of heroic ideologies between those who supported the act's objectives, and those who were strongly against it. Commonly known as the Superhuman Civil War, Jamie and the E.D.I. armed forces were desperately tasked by the Parliament after London was placed under temporary martial law, in hopes of investigating and forcibly apprehending countless individuals who were discreetly and secretly suspected as participants in the defunct Movement Alliance during the Ultimate War, without the individuals having any warrant of arrest whatsoever or considering that some of them were actually innocent to begin with.

Battle for the Right

Thankfully, the considerably unethical and slightly unrighteous actions of the E.D.I. tasked by the Parliament were intervened by the insurgency faction of heroes within the United Kingdom led by former E.D.I. tactical commander turned civil rights activist by the name of Lionheart, who decided to leave the agency after witnessing to how a peace-keeping organization and government can easily go out of control first-hand and become a regime of tyranny, in the times of desperation, and in this case she witnessed the Parliament's sudden turn against its citizens, instead of helping each other solve the bigger problem by finding the remaining perpetrators that tragically caused the war in the first place.

The two forces then battle out as the insurgency of Lionheart known as the Excalibur, who was in support in Steven Rogers' cause to fight off the proponents of the Registration, decided to protect the surviving targeted citizens and give them refuge in the meantime, while they find a way to determine whether they were truly innocent, or they were involved as criminals in the Movement Alliance during the Global Superhuman War. Nonetheless, Jamie continued his noble mission to apprehend both the insurgency and the targeted suspects, not knowing that they were already manipulated under the strings of the then current Prime Minister of the United Kingdom, the narcissistic genius Sir James Jaspers, one of the true secret masterminds for helping the Movement in their weaponry supply and most of the geographical access to the European Union during the war.

The End of Tyranny

The fight between both sides continued for several days, until both Jamie and Lionheart finally figured out that Prime Minister Jaspers was the the one responsible for most the manipulations reoccurring within Europe since the months before the Ultimate War had taken place. Using Jaspers' powerful influence against the joint forces, the latter tried to command his royal armed forces as he tried to get out of London and subsequently escape captivity from the authorities.

In the end, the two faction of heroes have settled their differences and decided to temporarily team up to take down Jaspers' secret regime, to which they successfully apprehended the evil mastermind and interrogated him into confessing the true identity of the agent Mark Gruler, who was revealed to be Helmut Zemo. This revelation had consequently helped Steven Rogers and the secret Avengers faction in confronting the true villain at the conclusion of the conflict, after Jamie and Lionheart decided to contact the heroic fugitive and trust him in secret.

In the aftermath of Civil War, Jamie and Lionheart have come upon a mutual decision to disclose their ties with each other for now, with the E.D.I. deciding to let them go and go into hiding with the rest of the registration's countless opponents, instead of handing the latter over to the harsh and overstrict authorities surrounding across England. Shortly afterwards, the E.D.I. began their new mission to investigate the Parliament, confronting and apprehending who may be affiliated with the unhinged former Prime Minister of the United Kingdom since his rise to power and fall.

When the stealthy invasion secretly planned by the ruthless Skrull race and empire comes to fruition, the Ultimates have come to reform once again with the willing assistance (consisting of both the 50-State Initiative of Iron Man and the Anti-Registration Forces of Captain America), S.H.I.E.L.D., Braddock & the E.D.I., the Thunderbolts, the Dark Avengers, and most of the Earth's super-powered individuals must unite to stop the conquering villainous extraterrestrial race, aided by the cosmic heroes, the Guardians of the Galaxy and the entire Ravager Network.

In the midst of the climactic battle against the Skrull invaders in the coastlines of the United Kingdom, Jamie and his national forces were almost defeated and had the country almost taken over due to the extraterrestrials' strength in numbers, before eventually a miracle was sent to them in the form of Lionheart and the noble Excalibur, the once separated insurgent faction unit of the European Defense Initiative, persistent in helping them combat and defend the entirety of Europe from the shapeshifting Skrulls.

In the very end of the global conflict against the Skrulls, a seemingly reformed Norman Osborn in the United States, who was now supposedly going by the heroic ironed persona of the Iron Patriot, had mercilessly killed the escaping Veranke, the Skull Queen, which ended the war and the attempted invasion all over the globe, once and for all. When the Superhuman Registration Act was finally abolished by the United Nations in terms of agreement with Steven Rogers and Tony Stark, the Excalibur was reabsorbed back to the main agency, with Jamie finally appointing Kelsey Leigh (Lionheart) as the second-in-command and assistant director of the E.D.I., before most of them have been given the Victoria Cross, as an act of gratitude for selflessly and courageously saving the United Kingdom and the rest of the European state from the extraterrestrial invaders.

Enhanced Mutant Physiology: Jamie was a mutant though his powers weren't immediately triggered due to reasons unknown, but he wore an exo-suit designed by his father. His exo-suit stores and were powered by interdimensional energies from an unknown mystical source and was designed by his father, Sir James Braddock. It allowed Jamie to enhance in his strength, endurance and durability, gain force field protection (from his quarterstaff), fly at supersonic speeds, and even regenerative healing factor.

He remained wearing the exo-suit as a member of the European Defense Initiative, fighting major crimes in the United Kingdom, until the following accident had occurred. During a session of the E.D.I. super soldier program, James undergo the process the same way Brian got his powers from the suit, only a lot more containable and safer. Following the program, James started experiencing the abilities from the suit even when he's not wearing it, revealing that the explosion had actually unlocked the latent abilities of Jamie, finally giving Jamie real superpowers. Because of this, Jamie gained several superhuman abilities as an enhanced mutant, formerly from his suit permanently transporting it into his own system and his unlocked mutation:

Retrieved from "https://marvelcomicsfanon.fandom.com/wiki/James_Braddock,_Jr._(Earth-61615)?oldid=223670"
Community content is available under CC-BY-SA unless otherwise noted.