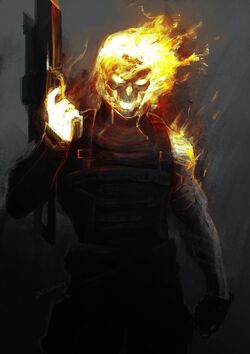 I feel the pain of the innocent every time I open my eyes. It's only fair you suffer the same fate.

James Barnes was Captain America's best friend in World War 2 who was abducted by Hydra at the end of the war. He was brainwashed into becoming their personal assassin, and was put into suspended animation for decades at a time.

In the present day, with Hydra practically dissolved, Bucky went on the run, only to encounter Captain America, jumbling his memory even further. However, after Captain America met his death at the hands of Apocalypse, Bucky's memories came flooding back and it became too much for him to bear.

He was approached by the demon Mephistopheles, who offered to erase his memories in exchange for becoming the Ghost Rider. Reluctantly, Bucky accepted, and was bonded to the Spirit of Zarathos, who takes control of his body whenever the Ghost Rider takes on a new mission.