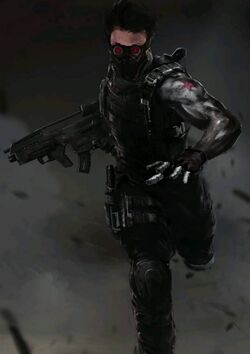 Earth-787
Base Of Operations
The Outside
Characteristics
Gender

James "Bucky" Barnes was a dedicated member of the US Army during World War 2, before being abducted and brainwashed by the Nazi organization known as Hydra. For decades, the Winter Soldier was frozen and reawoken by Hydra for special missions. Come the modern day after the rise of the Avengers, the Winter Soldier was deployed to assassinate Captain America, whom, as Bucky, he'd been best friends with. After succeeding in his mission and killing Captain America, his memories came flooding back, and he went on the run.

Winter Soldier was recruited into the Renegades by The Outsider under the promise that if he returned to his home reality he would be recaptured by Hydra. Unwilling to let that happen, Winter Soldier becomes a dedicated member of the Renegades, always doing whatever it takes to complete the mission.

Retrieved from "https://marvelcomicsfanon.fandom.com/wiki/James_Barnes_(Earth-787)?oldid=258860"
Community content is available under CC-BY-SA unless otherwise noted.