I will never Hail Hydra again, for as long as I live.

The Winter Soldier is both a boss and subsequently a playable character in Marvel Ultimate Alliance: Doom's Reckoning.

After serving alongside his best friend, Captain America, in World War 2, James "Bucky" Barnes seemingly met his end fighting against Hydra. However, in reality he had been brainwashed into becoming their personal assassin, the Winter Soldier, kept in stasis for years at a time until they found need of him. He was eventually pulled out by Hydra to fight against the Ultimate Alliance when the Cabal held them off on Hydra Island. However, coming face to face with Captain America once more helped the Winter Soldier break through his programming and join the Ultimate Alliance to fight against the Cabal. 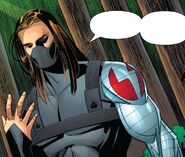 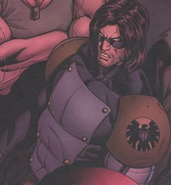 Captain America
Add a photo to this gallery
Retrieved from "https://marvelcomicsfanon.fandom.com/wiki/James_Barnes_(Earth-6110)?oldid=252429"
Community content is available under CC-BY-SA unless otherwise noted.