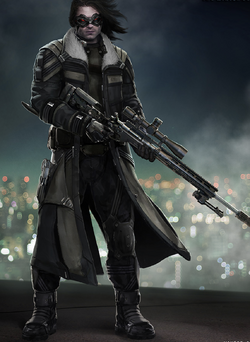 James "Bucky" Barnes was in the US Military, where he met and fell in love with Steve Rogers. However, Steve and Bucky were separated on a mission by an IED, and Bucky was presumed dead. In reality, he was taken in by Latverian Emperor, Victor von Doom, who brainwashed him into becoming a mindless killing machine.

He was sent against the Squadron Supreme, where he encountered Captain America, who was his former love, Steve. After several encounters, Steve tried his best to reach Bucky, but his programming was too strong.

This lasted for years, until slowly but surely Steve kept chipping away at his programing. Eventually, during a mission, Bucky fought against his orders for long enough to avoid killing Steve, only to be instantly taken out by Black Panther, who believed him to still be hostile.

During his last breaths, Bucky was able to recognize Steve, and apologize for everything he had put him through.

Retrieved from "https://marvelcomicsfanon.fandom.com/wiki/James_Barnes_(Earth-1515)?oldid=245818"
Community content is available under CC-BY-SA unless otherwise noted.